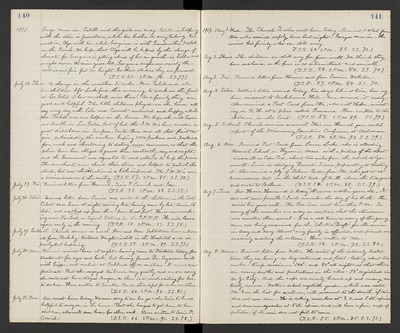 1917. George came in. Estelle and the girls are away. Estelle is helping with the store in Jamestown, which her brother is away taking his vacation, Olga with her, while Georgiana is with Grandmother Walsh on the Ranch. We hope that Olga will be helped by the change of climate, for Georgiana is getting ahead of her in growth - is taller and weight more. At nine years old, Georgiana weighs over ninety lbs. and is over five feet in height. In their studies they are forward (T.S.R. 62. 2 P.M. 96. S.S. 77.)

July 26. Thurs. A change in the weather to cooler - Mrs. Tabell and all her children left Lockeford this morning, to work in the fruit at Los Gatos - O how we shall miss them! As a family they are good and helpful. The little children played on the town all day every day with Lela and Earnest - contented and happy, while Mrs. Tarbell was our helper in the house. We hope she will have no trouble in Los Gatos, but of late the I.W.W.'s have made a great disturbance in San Jose, Santa Clara and all that fruit region, intimidating the workers, keeping 2000 pickers and packers from work and threatening to destroy seven canneries, so that the police have been obliged to guard them constantly, day and night, and the Government was requested to send soldiers to keep the peace. The merchants even closed their stores and helped to patrol the streets, but now this situation is a little improved. The I.W.W.'s are a serious meanace to the country. (T.S.R. 57. 2 P.M. 85. S.S. 70.)

July 28. Satur. Received letter from Eunice and wrote to the children in the East. Celeste came home at night, arriving late, having come by late train to Lodi, and walked up from there - poor, tired feet! He is now working near Turlock on Signal Stations for the S.P.R.R. He will leave again early in the morning. (T.S.R. 58. 2 P.M. 89. S.S. 75.)

July 30. Mon. Hannah arrived home at night - having come to Stockton today for treatment for eyes and back, but having found Dr. Seymour sick with Grippe, and oculist at Oakland off on vacation. It seems unfortunate. But she enjoyed Asilomar very greatly, and we are sorry she could not have stayed longer, as there is so much waiting for her to do here. Have written to Eureka. We are thankful for cooler weather. (T.S.R. 60. 2 P.M. 92. S.S. 81.)

Aug. 4. Satur. Willie's letters arrived today, two days behind time, having been mis-sent to Mokelumne Hill - have missed it sadly. Also received a Post-Card from Etta, who, with Helen, is visiting in N.H. at a place called Grasmere. Have written to the children in the East. (T.S.R. 53. 2 P.M. 89. S.S. 79.)

Aug. 6. Mon. Received Post Card from Louise Locke, who is attending Normal School in Hyannis, Mass. with a picture of the oldest windmill on Cape Cod, about two miles from the school at Yarmouth - Louise is studying Domestic Service preparatory to teaching it. Also received a pkg. of Balsam Powder from Etta, who got it at Uncanoonuc Mt. in the White Mts. of N.H. where the trees grow and wrote to Portland. (T.S.R. 54. 2 P.M. 88. S.S. 79.)

Aug. 7. Tues Bro. Horace Hammond is today "threescore and ten" years old. It does not seem possible! I well remember the day of his birth. He carries his years well. The Red Cross met here this P.M. So many of the members are away on vacations that the attendance was smaller than usual. It is a sad time, as many of the young men are being examined for the "Selective Draft" for the services in Army and navy. Almost every family is affected, and friends are anxiously awaiting the outcome. Have written to Ada. (T.S.R. 56. 2 P.M. 93. S.S. 80.)

Aug. 8. Wednes. Received letter from Willie. He writes of the intensely heated term they are having - so long - continued and fatal - lasting about two weeks - temp. Maximum 104- - and 80- all night - so that there are many deaths and prostrations in the cities. 98- registered in N. Y. City. And the crops are nearly burned up and many entirely ruined. Walter's school vegetable garden, which was rated No. 2 on the list for excellence, will succumb to the drouth, if rain does not soon come. He is selling cucumbers at 3, 4, and 5 cts, apiece and summer squashes at 5 etc. apiece, and will have a fine crop of potatoes, if the rain does not fail to come. (T.S.R. 55. 2 P.M. 85. S.S. 71.)