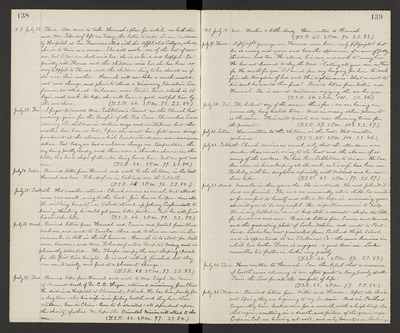 1917. July 12. Thurs. Ada came to take Hannah's place for awhile as both she and Mrs. Folendorf left us Today, the latter to enter the new University Hospital at San Francisco, allied with the Affiliated Colleges, where she is to train as a nurse. She will make one of the best of nurses, but O how we shall miss her, she is so kind and helpful. Especially will Theresa and the children miss her, she has been so very helpful to Theresa, and the children cling to her almost as if she were their mother. Hannah will now take a much-needed rest and change, and plans to attend a Missionary Education Conference, so called, at Asilomar, near Pacific Grove, which is to begin next week. We hope she will have a good, restful time by the seashore. (T.S.R. 66. 2 P.M. 98. S.S. 84.)

July 13. Fri. I forgot to record Mrs. Sahlstrom's Concert in the Church last evening, given for the benefit of the Red Cross. She worked hard training the children in motion songs and recitations, but the weather has been so hot, I fear she must have felt some disappointment at the returns, which I understand, were some six or seven dollars. But today we had a welcome change in temperature, the day being partly cloudy, and there was a thunder shower in the hills, two loud claps of thunder being heard here. But we got no rain. (T.S.R. 66. 2 P.M. 99. S.S. 84.)

July 15. Sabbath. Hot weather returns. Church services as usual, but attendance was small, owing to the heat - Jim has no helper - does all the milking himself, as Celeste stirred up Johnny Coykendall to leaving, thinking he could get some better position - But he will find his mistake later (T.S.R. 66. 2 P.M. 99. S.S. 83.)

July 16. Mond. Received letters from Hannah and Eunice and postal from Alma Ambrose, and wrote to Eureka. Alma and Arthur are now in Louisiana - he is still in the oil business. Hannah is to start for Asilomar tomorrow, and Mrs. Folendorf enters Hospital today and is pleasantly situated. The Thorps occupy the new sleeping-porch for the first time tonight. It is not entirely finished, but they can use it nicely, and find it a pleasant change. (T.S.R. 68. 2 P.M. 97. S.S. 83.)

July 17. Tues. Received letter from Hannah and write to Mrs. Siegel. We learn of the recent death of Dr. C.R. Hager, returned missionary from China. He died in a Hospital at Claremont, I think. He has been poorly for a long time - also his wife is in failing health, and they have three children, born in China - here to be educated - all dependent upon the charity of others. We hope the Oriental Mission will attend to the case. (T.S.R. 62. 2 P.M. 97. S.S. 84.)

July 19. Thurs. Fiftyeight years ago our Howard was born - only fiftyeight, but he is weary and worn and has the appearance of a man of fully "threescore and ten". He allows his care and work to worry him. He has not learned to obey the Word - "Casting all your care on Him for He careth for you". O I cannot pen my longing for him to "seek first the kingdom of God and His righteousness" - What a rest to his soul he would then find! Received letters from Willie and Hannah. She is now at Asilomar, Enjoying the sea breezes. (T.S.R. 64. 2 P.M. 101. S.S. 84.)

July 22. Sabbath. Church services as usual, only that the attendance was smaller than usual, owing to the heat and the absence of so many of the workers - We had Rev. Sahlstrom to dinner. He has been alone in housekeeping all the week, as his wife has been in Berkeley with her daughters, especially with Mildred and her new-born babe. (T.S.R. 63. 2 P.M. 99. S.S. 87.)

July 23. Mond. Marcella is three years old. She is not well. She and John Willard are feverish. She is a an unusually active child, too much so for comfort to herself and others. We hope in succeeding years she will grow to be very useful. Her disposition now is to help. She is very talkative, cannot keep still a minute - sleeps too little for her nerves and ours. Received letters from Eunice and Hannah and the graduating photo of Locke Webster, and wrote to Portland. Locke has now graduated from Portland High School and is apprenticed to an Electrical Co. - the same business in which his brother Dean is engaged - a good business - Locke resembles his father in looks very greatly. (T.S.R. 66. 2 P.M. 99. S.S. 83.)

July 25. Wednes. Received letters from Willie and Horace. After all their wet Spring, they are beginning to cry for rain. And in Portland Oregon, they have lacked rain for a month, with a high temp. for that region, resulting in a drouth, and failure of the grain crops. Crops in Cal. are turning out well, and only harvesters an lacking.