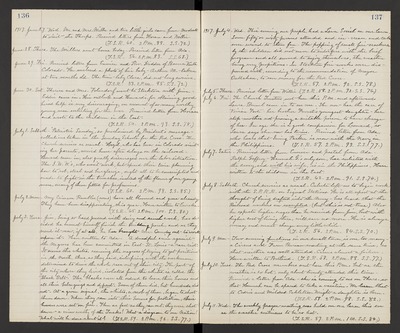 June 30. Sat. Theresa and Mrs. Folendorf went to Stockton with Jim - Eddie came in. His outlook and Howard's, for obtaining good hired help in very discouraging, on account of so many worthy young men enlisting for the war. Received letter from Horace and wrote to the children in the East. (T.S.R. 54. 2 P.M. 93. S.S. 78.)

July 1. Sabbath. "Patriotic Sunday." so proclaimed by President's message - collections taken in the Sunday Schools for the Red Cross. The Church services as usual. Hazel, who has been in Colorado visiting her presents, arrived home after delays on the railroad. Howard came in, also greatly discouraged over the labor situation. The I. W. W.'s, who won't work, but spend their time planning how to rob, steal and burglarize, ought all to be conscripted and made to fight in the trenches, instead of the flower of our young men, many of them fitted for professions. (T.S.R. 60. 2 P.M. 98. S.S. 85.)

July 3. Tues. Jim, being so hard pressed with dairy and ranch work, has decided he cannot himself finish the building porch, and as they need it now, if at all, he has brought Mrs. Condy out to work upon it. Have written to Ada - A dreadful crime against the Negroes has been committed in East St. Louis - a race riot. It seems the whites, accusing the negroes of trying to get positios in the North, thus, as they said, interfering with the workmen determined to drive the whole race out of their city - The part of the city where they lived, isolated from the whites, is called the "Black Belt". The blacks were all ordered to leave their homes and all their belongings and depart. Some of them did, but hundreds did not. At a given signal, the whites, a mob of them, began to shoot them down. When they ran into their houses for protection, their houses were set on fire. Then as fast as they ran out, they were shot down - a crime worthy of the Turks! What a disgrace to our Nation! What will be done about it? (T.S.R. 59. 2 P.M. 92. S.S. 77.)

1917. July 4. Wed. This evening our people had a Lawn Social on our lawn. Some fifty or sixty persons attended and ice-cream and cake were served to them free. The popping of small fire-crackers by the children did not seem to interfere with the brief program and all seemed to enjoy themselves, the weather being very propitious. In Stockton fire works were dispensed with, according to the recommendation of Mayor Oullahan, to save money for the Red Cross. (T.S.R. 57. 2 P.M. 92. S.S. 78.)

July 6. Fri. The Church Trustees met here this P.M. and afterwards Laura Bruml came in to see me - She now has the care of Vivian Foote - her brother Forrest's youngest daughter - her step-mother not proving a suitable person to have charge of her. In age she is a good companion for Leonard, so Laura says she now has twins. Received letter from Ada, who hears that Irving Parker is now with the Navy in the Philippines. (T.S.R. 57. 2 P.M. 93. S.S. 77.)

July 8. Sabbath. Church services as usual. Celeste left us to begin work with the S.P.R.R. on Signal Stations. He is all upset at the thought of being drafted into the Army - has heard that the Railroad workers are exempted - (but this is not true.) Also he expects higher wages than he received from Jim, but with higher cost of living there, will save no more. He is always uneasy and must change every little while. (T.S.R. 56. 2 P.M. 84. S.S. 70.)

July 10. Tues. The Red Cross members met here this P.M. but as the weather is so hot, only about twenty attended this time Received a letter from Ada, she is coming to us on Thurs, so that Hannah can be spared to take a vacation. We learn that to Cedric and Mildred Sahlstrom Wright a daughter is burn. (T.S.R. 58. 2 P.M. 98. S.S. 82.)