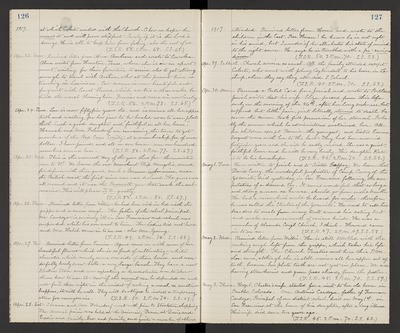 Apr. 23. Mon. Received letter from Alma Ambrose and wrote to Eureka. Alma writes from Houston, Texas, where she is in an apartment, writing for their furniture to arrive, also to get strong enough to travel with Arthur, who at the present time is traveling in Louisiana. Our avenue is now beautiful and fragrant with locust blooms, which are two or three weeks behind the usual blooming time Freesia's and roses are now lovely. (T.S.R. 56. 2 P.M. 73. S.S. 65.)

Apr. 24. Tues. Lou is now fiftyfive years old, and is minus all her upper teeth, and waiting for her jaw to be healed so as to wear plate teeth. Such a good daughter and "faithful in all her house". Hannah and Mrs. Folendorf are canvassing the town to get members of the Red Cross Society, at a membership fee of one dollar. I have joined, and all in our house - over one hundred members secured here. (T.S.R. 52. 2 P.M. 77. S.S. 67.)

Apr. 25. Wed. This is the warmest day of the year thus far thermometer rose to 80-. We learn the our Merchant-Ship Mongolia, armed for defense with three guns, sunk a German submarine, near the British coast, the first since war was declared. The guns were all named and it was the Roosevelt gun that sunk the submarine. This will please T.R. greatly. (T.S.R. 52. 2 P.M. 80. S.S. 67.)

Apr. 26. Thurs. Received letter from Willie - he had been sick in bed with the grippe and a severe cough. The father of the school principal, Mr. Cardozo, is seriously ill in San Francisco and school was suspended while his son went to him. The Ladies Aid met here and Mrs. Hatch came in to see me - also Mrs. Young. (T.S.R. 49. 2 P.M. 74. S.S. 68.)

Apr. 27. Fri. Received letter from Eunice - Agnes came in with some of her beautiful flowers which she is so fond of cultivating - white clematis, which nearly covers one side of their house, and wonderfully lovely snow-balls - a very large bunch. They have a new Electric Stove and are expecting a demonstrator soon, to show them how to use it. Now if the current can be depended on and not fail them right in the midst of cooking a meal, as sometimes happens, it will be well. They will be obliged to install a temporary stove for emergencies. (T.S.R. 50. 2 P.M. 74. S.S. 67.)

Apr. 28. Sat. Theresa and Mrs. Folendorf went with Jim to Stockton shopping. The Annual picnic was held at the University Farm at Davis and Eddie and family, Geo. and family and quite a number of others

1917. attended. Received letter from Horace and wrote to the children in the East. Poor Horace! he knows he is not right in his mind, but I wonder if he attributes his state of mind to the right source. He says he is troubled with a pe-curious disease! (T.S.R. 50. 2 P.M. 70. S.S. 58.)

Apr. 30. Mon. Received a Postal Card from Josiah and wrote to Portland. Josiah writes that his wife - Eliza - passed from this life early on the morning of the 26th, after his long sickness, but suffered but little pain, just literally starved to death because the cancer took full possession of her stomach. Probably the serum which he administered sustained her. All her children except Bennie, the youngest, and Sister Emma Sargent were with her to the last. They had been married fortynine years, and she will be sadly missed. She was a quiet, faithful lover and he will be very lonely. His daughter Kate is to be his housekeeper. (T.S.R. 46. 2 P.M. 72. S.S. 62.)

May 1. Tues. Have written to Josiah and to Sister Geffroy. We learn that David Curry, the wonderful proprietor of Camp Curry of the Yosemite, died yesterday in San Francisco, following the amputation of a diseased toe. It seems wonderful that so large and strong a man as he was, should go from such a trouble. He had a voice which could be heard for miles - therefore he was called the "Stentor of the Yosemite". He used to call his boarders to meals from many tents around his eating tent and make announcements of various kinds. He was a member of Alameda Cong'l Church, I think. Howard came in to see me. (T.S.R. 47. 2 P.M. 69. S.S. 58.)

May 2. Wed. Received letter from Willie. He is still troubled with the racking cough left from the grippe, which takes his life and strength. The Church Trustees met here this P.M. Lou came, although she is still minus all her upper set of teeth, because her plate teeth are not yet in place. We are having strawberries and green peas already from the pedlar. (T.S.R. 45. 2 P.M. 70. S.S. 59.)

May 3. Thurs. Hazel, Chester's wife, started for a visit to her old home in Pueblo, Colorado. Mr. Antonio Cardoza, father of Truman Cardozo, Principal of our district school, died on May 1st, in San Francisco, at the home of his daughter, after a long illness. His wife died some two years ago. (T.S.R. 45. 2 P.M. 70. S.S. 60.)