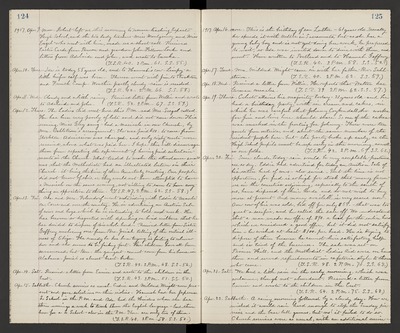 1917. Apr. 9. Mon. Robert left us this morning to resume teaching Esparto High School, and the two lady teachers Miss Montgomery and Miss Eugel - who went with him, made us a short call. Received Easter Cards from Beacon and grandson John Fillmore Locke and letters from Adelaide and John, and wrote to Eureka. (T.S.R. 40. 2 P.M. 61. S.S. 55.)

Apr. 12. Thurs. The Ladies Aid met here this P.M. and Mrs. Siegel called. he has been very poorly of late and did not came down. This evening, Miss Grey sang - had a musicale in our Church, by Mrs. Sahlstrom's arrangement. She was paid $10. to come from Stockton. Admission was charged, and only sixty cents were received, above what was paid her. I hope this will discourage them from repeating the experiment of having paid entertainments in the Church. What tended to make the attendance small was that the Methodists had an illustrated lecture in their Church - it being the time of their Quarterly Meeting. Our people did not know of this, or they would not have attempted to have a Musicale on the same evening, not willing to seem to have anything in opposition to them. (T.S.R. 47. 2 P.M. 62. S.S. 58.)

Apr. 13. Fri. Ada and Mrs. Folendorf went auto riding with Eddie to Manteca, Ceres and over the country. He is advertising an Auction Sale of cows and hogs which he is intending to hold next week. He has become si disgusted with depending on hired milkers that he has decided to dispose of his whole herd. Received letter from Sister Geffroy enclosing one from Bro. Josiah telling of the critical illness of Eliza. The remedy he has been trying is failing to relieve her and she seems to be failing fast. Her children have all been summoned, but Ben. the youngest - cannot come from his home in Alabama. Josiah is almost heart-broken. (T.S.R. 42. 2 P.M. 68. S.S. 56.)

Apr. 15. Sabbath. Church services as usual. Cedric and Mildred Wright were present and gave solutions on their violins. Hannah had her Japanese S. School in the P.M. and Ada had the Hindus whom she has three evenings a week to teach them the English language - had them here for a S. School - also in the P.M. There are only two of them. (T.S.R. 40. 2 P.M. 58. S.S. 50.)

Apr. 19. Thurs. Celeste attains his majority today - 21 years old - and he had a birthday party, with ice cream and cakes, in which he was careful that Johnny Coykendall, who works for Jim and lives here should share. So one of the cakes was marked in the frosting for Johnny. There were ten guests from outside, and about the same number of the resident people here - but the party broke up early, as the High School pupils must be up early in the morning, as well as our folks. (T.S.R. 42. 2 P.M. 69. S.S. 62.)

Apr. 20. Fri. Some clouds today - rain would be very acceptable - pastures are so dry. Eddie had advertised for today an Auction Sale of his entire herd of cows - also swine. But the time is not opportune, for feed is so high for stock that many farmers in the counties adjoining, especially to the south of us, have disposed of their herds and do not wish to buy more at present. And money available is very scarce now. One cow of his was sold, bid off for only $55. - that was too great a sacrifice, and he called the sale off. We understand that a man made an offer of $90. a head for the entire herd which we consider a good offer, but it did not satisfy him, he wished at least $100. per head. He is trying to dispose of them because he cannot hire satisfactory help and is tired of the business. The sale was set on Pioneer Hill, and the Methodist Ladies Aid were on hand there and served refreshments in cafeteria style to those who come. (T.S.R. 48. 2 P.M. 70. S.S. 63.)

Apr. 22. Sabbath. A rainy morning followed by a cloudy day. How we wished it would rain hard enough to stop the Sunday picnics and the base-ball games, but no! it failed to do so. Church services were as usual, with an additional service.