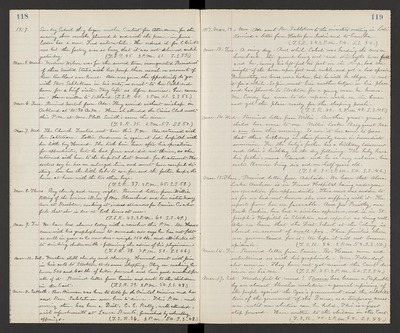 1917. Sunday School they began another Contest for Attendance, for the ensuing three months, planned to end with the picnic in June Eddie has a new Ford automobile. He ordered it for Christmas, but the factory was so busy that it was not delivered until yesterday. (T.S.R. 45. 2 P.M. 61. S.S. 55.)

Mar. 5. Mond. Woodrow Wilron was for the second term inaugurated President of these United States, with less pomp than usual on account of these troublous war times. Ada was given the opportunity to go with Rev. Sahlstrom in his auto, so went to her Oakland home for a brief visit. They left us before sunrise. Geo. came in. Have written to Portland. (T.S.R. 40. 2 P.M. 61. S.S. 52.)

Mar. 7. Wed. The Church Trustees met here this P.M. Ada returned with Rev. Sahlstrom. Lottie Anderson is again at Lodi hospital with her little boy Howard. She took him home after his operation for appendicitis, but he had fever and did not thrive, so she returned with him to the hospital last Mond. for treatment. The doctors say he has an enlarged liver and must have careful dieting. Lou has the little babe to care for, and the father keeps the house at home with the two other boys. (T.S.R. 37. 2 P.M. 65. S.S. 58.)

Mar. 8. Thurs. Day cloudy and rainy night. Received letter from Willie telling of the serious illness of Mrs. Blanchard and her sister Mary Ann at Brockton, making it indeed strenous for Eunice C - who feels that she is due at both homes at once. (T.S.R. 43. 2 P.M. 60. S.S. 49.)

Mar. 11. Sabbath. Rev. Hinman was here to talk for the Oriental Missions and he and Rev. Sahlstrom were here to dinner. This. P.M. and evening there has been a Dist. C.E. Rally, well attended, with refreshments at Laura Bruml's, furnished by voluntary offerings. (T.S.R. 36. 2 P.M. 50. S.S. 48.)

Mar. 13. Tues. A rainy day. And while Celeste was herding the cows on horseback, the ground being wet and slippery, the horse fell and he, having his left foot too fast in the stirup, had the weight of the horse upon foot and ankle, and got a bad sprain. Fortunately, no bones were broken, but he will be obliged to rest it for a while. So Jim must hire another helper in his place. and has phoned to Stockton for a young man he knows. Mr. Condy has come to do repair work on the house and get the place ready for the sleeping porch. (T.S.R. 42. 2 P.M. 48. S.S. 45.)

Mar. 14. Wed. Received letter from Willie. Another great grandchild has come to me. Nellie Locke Bergquest has a son born this morning. So now it has come to pass that three birthdays in their family come in immediate succession. For the baby's father has a birthday tomorrow and Alice's birthday is the day following. The baby bears his father's name - Edward - and he is very welcome, his sister Bernice being six and one-half years old. (T.S.R. 35. 2 P.M. 50. S.S. 46.)

Mar. 15. Thurs. Received letter from Adelaide. We learn that Alma Locke Ambrose is in Fresno Hospital having undergone an operation for appendicitis. This news was sudden to us for we had not known she was suffering with it. The reports from here are favorable. And Joe Priestly, our Bank Cashier, has had a similar experience, and is in St. Joseph's Hospital in Stockton, and reported as doing well. Also we learn that the Dist. School at the Colony is closed on account of small-pox. Three families there are quarantined for it. We hope it will not become epidemic. (T.S.R. 34. 2 P.M. 52. S.S. 50.)

Mar. 17. Sat. Wonderful to record! Russia has become a Republic by an almost bloodless revolution - a general uprising of the people against the Czar's government, and the substitution of the government of the Duma, as a temporary measure, until an election can be held. This is a great step forward. Have written to the children in the East. (T.S.R. 40. 2 P.M. 60. S.S. 55.)