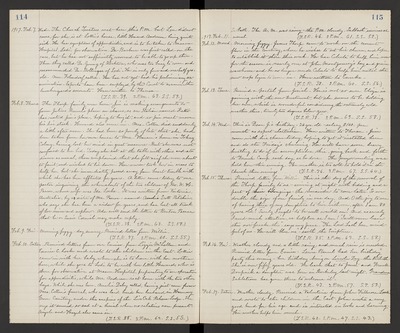 1917. Feb. 7. Wed. The Church Trustees met here this P.M. but Lou did not come, for she is at Lottie's house, little Howard Anderson being quite sick. He has symptoms of appendicitis, and is to be taken to Mason Hospital, Lodi for observation. Dr. Barbour was first called on the case, but he has not sufficiently recovered to be able to go up there. Then they called Dr. Young of Stockton, who was too busy to come and recommended Dr. Bollinger of Lodi. He is only four and one-half yrs. old. Mrs. Folendorf called. He has not yet had his preliminary examination. Experts have been employed by the Court to examine the lumberyard's accounts. Have written to Theresa. (T.S.R. 39. 2 P.M. 63. S.S. 59.)

Feb. 8. Thurs. The Thorp family were here - Jim is making arrangements to farm Julius Bruml's place on shares, as an Italian named Ralto has rented Jim's place, hoping to buy it, and so Jim must move his live stock. Howard also came in - Mrs. Cotton died suddenly a little afternoon. She had been so poorly of late that she had been taken from her own house to Mrs. Hansen's home in Tokay Colony, having lost her mind in great measure. But she was not confined to her bed. Today she sat at the table with others and ate dinner as usual, then complained that she felt as if she were about to faint, and wished to lie down. Her nurse took her in arms to help her, but she immediately passed away from heart trouble with which she has been afflicted for years. A letter came today to our pastor inquiring the whereabouts of the two children of Rev. W. H. Pascoe, whose wife was Ida Locke. It was written from Victoria, Australia, by a sister of Mr. Pascoe - named Amelia Scott Ritchie, who says she has been a widow for years, and has lost all track of her nice and nephew - Ada will send the letter to Benton Pascoe that he or Susie Cornish may make reply. (T.S.R. 38. 2 P.M. 63. S.S. 58.)

Feb. 10. Satur. Received letters from our Eunice, from Lizzie McLellan and Eunice C. Locke and wrote to the children in the East. Lottie came in with her baby, whom she is to leave, with her mother here, while she goes to Lodi to be with her little Howard, who is there for observation at Mason Hospital, preparatory to an operation for appendicitis, while Mr. Anderson is at home with the two other boys. While she was here, Amelia Daley called, having just come from Mrs. Cotton's funeral, who was laid beside her husband in Harmony Grove Cemetery, under the auspieces of the Live Oak Rebecca Lodge - She says it seemed so sad at a burial where no relatives were present. Myrle and Hazel also came in. (T.S.R. 35. 2 P.M. 62. S.S. 55.)

Feb. 12. Mond. Morning foggy. James Thorp came to work on the cement floor in the courtway. where he wishes to set his churn, and hopes to establish it there this week. He has Celeste to help him now for the season is nearly over at John Montgomery's hay and grain warehouse and he no longer needs Celeste to help him until the new crops begin to come in. Have written to Eureka. (T.S.R. 38. 2 P.M. 60. S.S. 56.)

Feb. 13. Tues. Received a postal from Josiah. He is not so sure Eliza is gaining with the new treatment, but she seems to be holding her own, which is wonderful considering the extremely cold weather there, twenty two degrees below zero. (T.S.R. 38. 2 P.M. 63. S.S. 58.)

Feb. 14. Wed. This is Dean J.'s birthday - 26 yrs. old - salary $160. per month as expert electrician. Have written to Theresa. Jim came with his churn today, hoping to get it installed here and do the Friday's churning. He will have some heavy hustling to do if he accomplishes this, going back and forth to French Camp each day, as he does. The prayer meeting was held here this evening. The weather is too cold to hold in in the Church these evenings. (T.S.R. 36. 2 P.M. 67. S.S. 64.)

Feb. 15. Thurs. Received letter from Willie. This is the day of the removal of the Thorp family to us - arriving at night with bedding and a part of their belongings - the remainder to come later. So we double the size of our family in one day. And O the joy to me of having three of my daughters to live with me, after I am 80 years old! Surely I ought to be well waited on! And as surely I need much attention, as helpless as I am! "I will never leave thee nor forsake thee", says my Jesus. "The Lord hath been mindful of us - He will bless us" - saith the Scripture. (T.S.R. 35. 2 P.M. 63. S.S. 58.)

Feb. 16. Fri. Weather cloudy and a little rainy, and much rain is needed. Received letter from Eunice. Laura Bruml had her birthday party this evening - her birthday being on Lincoln Day - the twelveth. She is now fifty years old. We learn that to Janet and Frank Doupnik a daughter was born in Berkeley last night. Grandma Sahlstrom has gone there to welcome it. (T.S.R. 43. 2 P.M. 57. S.S. 53.)

Feb. 17. Satur. Weather cloudy. Received a Valentine from John Fillmore Locke and wrote to the children in the East. John writes a very good hand for his age and is interested in books and learning. His mother helps him much. (T.S.R. 42. 2 P.M. 47. S.S. 43.)