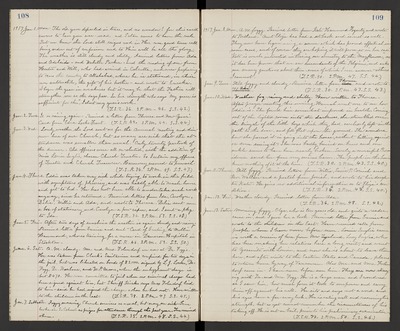 1917. Jan 1. Mon. The old year departed in tears, and no wonder! for this earth seems to have gone war - mad [?] Satan seems to have the rule. But we know the Lord still reigns and in His own good time will bring order out of confusion and to Him will be all the glory - The weather is still cloudy and chilly. Received letters from Ada and Adelaide - and Webster Parker - and the reading of one from Hester and Will, who had arrived in Calcutta, and were preparing to cross the country to Allahabad, where he is stationed, in their own automobile, the gift of his brother - and wrote to Eureka. I begin the year in weakness but it may be that the Father will strengthen me as the days pass. In his strength who says "My grace is sufficient for thee", I start my year's work. (T.S.R. 36. 2 P.M. 46. S.S. 42.)

Jan. 3. Wed. Lovely weather the Lord sent us for the Annual meeting and dinner here of our Church, but so many are sick that the attendance was smaller than usual. Only twenty partook of the dinner. Old officers were all re-elected, with the addition of Miss Louise Inglis, chosen Church Trustee. So I retain my offices of Trustee and Church Treasurer. Harmony seemed to prevail. (T.S.R. 36. 2 P.M. 49. S.S. 47.)

Jan. 4. Thurs. Eddie was taken very sick while trying to work in the field with symptoms of pleurisy, and was hardly able to reach home and get to bed. He has not been able to undertake such work anyway, since he returned - Received letters from Ida, Carolyn, Delia, Willie and Ada, and wrote to Theresa. Delia sent me a box of stationery and Carolyn a pen-wiper, and I sent a pkg. to Ida. (T.S.R. 36. 2 P.M. 53. S.S. 48.)

Jan. 5. Fri. After two days of sunshine the weather is again cloudy and rainy. Received letter from Eunice and sent Card of Greeting to Nellie Hammond, who is training for a nurse in Dameron Hospital in Stockton. (T.S.R. 46. 2 P.M. 52. S.S. 50.)

Jan. 6. Sat. A.M. cloudy. Mr. and Mrs. Folendorf are now at Dr. Fogg's. He was taken from Clark's Sanitarium and confined for two days in the jail, but was liberated on bonds of $ 2000. signed by L.J. Locke, Dr. Fogg, Dr. Barbour, and W.P. Moore, when the embezzlement charge is but $ 470. He was committed to jail when no criminal charge had been signed against him, but Sheriff Riecks says Max Folendorf lied to him - said he had signed the charge when he had not. Have written to the children in the East. (T.S.R. 38. 2 P.M. 47. S.S. 45.)

1917. Jan. 8. Mon. A.M. foggy. Received letter from Kate Hammond Fogarty and wrote to Portland. Aunt Eliza has had a set back and is not so well. They now have begun using a serum which has proved effectual in some cases, and of course they are hoping it will prove so in her case. - Kate is much interested in tracing our ancestry to the "Mayflower", as it has been proven that we are descendants of the "Piligrims", and asks me many questions about them, some of which I can answer others I cannot. (T.S.R. 30. 2 P.M. 47. S.S. 44.)

Jan. 10. Wed. Weather fog - rainy and chilly. Have written to Theresa. After prayer-meeting this evening, Hannah went over to see how Eddie is. She found him somewhat improved in health. Coming out of the lighted room into the darkness, she stumbled over the tricycle of the little boys which they had carelessly left in the path to the door, and fell flat upon the ground. She wonders how she passed it in going into the house, without hitting against or even seeing it. She was badly bruised on knees and one ankle seems to have been nearly broken. Surely a merciful Providence saved her from very serious harm. The people in the house knew nothing of it at the time. (T.S.R. 30. 2 P.M. 43. S.S. 40.)

Jan. 13. Sat. Morning foggy. Olga, who is ten years old, and quite a reader, came in, and I gave her a book. Received letter from Eunice and wrote to the children in the East. Have received calls from people from I have never before seen. Louise Inglis came in with a cousin of hers from New Zealand, Lucy Inglis, who has been making her relatives here a long visit, and went to Yosemite with Louise, and now she is about to leave them here, and after visits to the Eastern States and Canada, plans to return home by way of Vancouver. Also Mr. and Mrs. Folendorf came in - I have never before seen him. They are now staying with Dr. and Mrs. Fogg. He is a large man and I wondered as I saw him, how much force it took to over power and carry him off against his will. He sits and says not a word, and his eyes have a far-away look. He is eating well and recovering his strength, but as yet cannot remember the circumstances of his taking off. He is out on bail, prior to his preliminary examination. (T.S.R. 33. 2 P.M. 50. S.S. 46.)