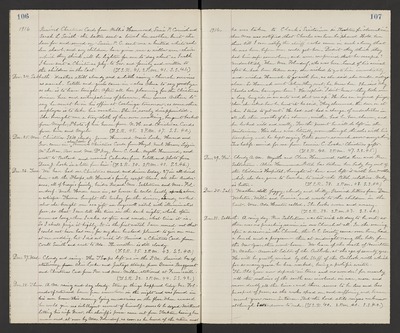 1916. Received Christmas Cards from Nellie Hammond, Susie P. Cornish and Sarah L. Smith - the latter sent a towel her mother knit the lace for and sewed on - Susie P. C. sent me a knitted white woollen shawl, and my children have given me a willow arm-chair which they think will be lighter for me to drag about as I walk. I have sent a Christmas pkg. to Geo. and family and written to the children in the East. (T.S.R. 41. 2 P.M. 41. S.S. 41.)

Dec. 24. Sabbath. Weather still cloudy and a little rainy - Church services as usual. Estelle and girls came in - also Alma to say goodbye as she is to leave tonight. After all her planning for the Christmas dinner here and anticipations of pleasure, here comes Arthur to say he must be in his office at Coalinga tomorrow, as some other employee is to take his vacation. She is sorely disappointed. She brought me a tray-cloth of her own making, bouquet-basket from Myrle, Photo of his house from N. H. and Christmas Cards from Him and Myrle (T.S.R. 45. 2 P.M. 47. S.S. 40.)

Dec. 26. Tues. We have had our Christmas crowd and dinner today, 27 in all dined here - all the Thorps, all Howard's family except Alma, all the Andersons, all the George's family, besides Rev. and Mrs. Sahlstrom and Mrs. Folendorf. Uncle Horace came in, so hoarse he could hardly speak above a whisper. Theresa brought the turkey for the dinner, already cooked. also she brought me as a gift an Ingersoll watch with illuminated face, so that I can tell the time in the dark nights, which often seem so long, when I wake so often and wonder what time it is. So I shall prize it highly. It is the first watch I ever owned - not that I could not have had one, for my dear husband planned to give me one at our wedding, but I did not wish it. Received a Christmas Card from Corell Smith and wrote to Ada. The weather is still cloudy. (T.S.R. 35. 2 P.M. 43. S.S. 40.)

Dec. 27. Wed. Cloudy and rainy. The Thorps left us in the P.M. Received box of stationery from Alice Locke and postage stamps from Bernice Bergquest and Christmas Card from Rev. and Mrs. Miller, stationed at Farmersville. (T.S.R. 32. 2 P.M. 44. S.S. 42.)

Dec. 28. Thurs. A. M. rainy and day cloudy. Strange things happened today. Mr. Folendorf returned home from somewhere in the night and was found in his own home this morning, lying unconscious on the floor. When aroused he could give no intelligent account of himself - seems to be dazed. Without letting his wife know, the sheriff's posse came out from Stockton, having been summoned at once by Max Folendorf, as soon as he heard of the return and

1916. he was taken to Clark's Sanitarium in Stockton for "observation". When Max was notified that Charles was here he phoned Hold him there till I can notify the sheriff" - who came in such a hurry that he was here before Max could get here - Didn't they think they had him safe somewhere, and were surprised that he escaped? Undoubtedly. When Mrs. Folendorf, who was here, heard of his arrival after he had been taken away, she wished to go to him immediately and wished Hannah to go with her, as she said she could not go alone. So Hannah went - When they met he knew her. She said "Why Charles where have you been?" He replied "I don't know they took me a long, long ride in an auto and shut me up." He has an injured finger when she asked how he hurt it he said, "They slammed the door on it when I tried to get out." He had not had a change of underclothes in all the three months of his absence, neither had he been shaven, and he looked wild and woolly. For the present he will be left in the Sanitarium. His shoes were literally worn through the soles with his tramping and he kept saying "O the snow - so much snow everywhere." Two hdkfs - arrived for me from Eunice C. Locke - Christmas gifts. (T.S.R. 40. 2 P.M. 47. S.S. 45.)

Dec. 29. Fri. Cloudy A. M. Myrtle and Clara Hammond called here and Rev. Sahlstrom. Alice Hammond Petch has taken her baby boy out of the Children's Hospital, brought it here and left it with her mother while she has gone to Eureka to visit the Petch relatives. Baby is better. (T.S.R. 38. 2 P.M. 48. S.S. 44.)

Dec. 31. Sabbath. A rainy day. Rev. Sahlstrom was too sick all day to be out, so there was no preaching service in our Church at all. In the evening after a session in the Church, the C. E. Society came over here, had a lunch and a program - then at midnight rang the bells for the New Year, then went home. We learn of the death of Hamilton W. Mabie - Associate Editor of the Outlook, at the age of seventy yrs. He will be greatly missed by the Staff of the Outlook, with which for so many years he has worked, being a prolific writer. The Old Year now departs in tears and no wonder! for nearly all the nations of the earth are involved in war, more and more deadly all the time and there seems to be less and less prospect of peace, as the weeks speed on and suffering and bereavement grow more intense. But the Lord still reigns we know although Satan seems to rule. (T.S.R. 40. 2 P.M. 40. S.S. 40.)