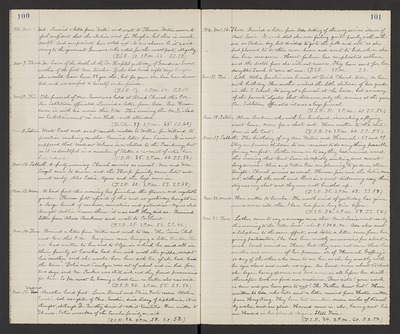 1916. Nov. 8. Wed. Received a letter from Willie and wrote to Theresa - Willie seems to fell confident that the election went for Hughes, but there is much doubt. And our precincts here voted wet - to our shame be it said owing to the ignorant Germans, who voted, for the most part, illegally. (T.S.R. 38. 2 P.M. 62. S.S. 58.)

Nov. 11. Satur. Wrote East and sent candle-molds to Willie, for Willard to practise making candles. Received letter from Eunice. It is now supposed that Woodrow Wilson is re-elected to the Presidency, but as it is doubtful in a number of States, a re-count of votes has been ordered. (T.S.R. 35. 2 P.M. 60. S.S. 52.)

Nov. 13. Mon. A hard frost this morning has finished the flower and vegetable garden. Theresa felt afraid of this and so yesterday brought me a large bunch of rosebuds, carnations and gallardias - Agnes also brought dahlias to save them - it was well they did so. Received letter from Alma Ambrose and wrote to Portland. (T.S.R. 25. 2 P.M. 53. S.S. 46.)

Nov. 14. Tues. Received a letter from Willie and wrote to Ada. The Civics Club met here this P.M. Georgiana came bringing a letter Benton Pascoe had written to her and to Olga, in which he said all in their family at Eureka had been sick with the grippe, except his "mother and she would have been sick too, if she had the time". Delia and Carolyn were out of school and in bed for two days, and Mr. Parker was still sick and they feared pneumonia for him. So Ida must be having a hard time, as Benton also was sick. (T.S.R. 30. 2 P.M. 55. S.S. 50.)

Nov. 15. Wednes. Another hard frost. Laura Bruml and Elvira Foote called. Althea Emslie, with daughter of Chas Emslie, died today of diphtheria, it is thought, although Dr. Priestley denies it - calls it tonsilitis. Have written to Theresa. Other members of the Emslie family are sick. (T.S.R. 26. 2 P.M. 58. S.S. 53.)

1916. Nov. 16. Thurs. Received a letter from Ada telling of the very serious illness of Aunt Susie. It seem that she rose feeling quite poorly with asthma on Election day, but decided to go to the polls and vote as she had planned to do them came home and went to bed, where she has been ever since. Heart failure has complicated asthma and the doctor fears she will not recover. They have sent for her daughter Sarah to come at once. (T.S.R. 2 P.M. S.S.

Nov. 17. Fri. Little Althea Emslie was buried at Brick Church today on her sixth birthday. Her mother wished the little children of her grade in the S. School, to sing at a funeral at the house, but so many of the parents objected that there were only the services at the grave. Rev. Sahlstrom officiated it was large funeral. (T.S.R. 31. 2 P.M. 61. S.S. 52.)

Nov. 19. Sabbath. The birthday of my dear Willie and Hannah - 51 and 49. They are previous children to me - anxious to do everything possible for my comfort. Luther came in to say they had received word this morning that Aunt Susie is rapidly sinking and cannot long survive - Alice and Nettie Ross are planning to go down there tonight. Church services as usual. Theresa, Jim and the babies came out, although the north wind blows in a most distressing way - their stay was very short and they were well bundled up. (T.S.R. 35. 2 P.M. 63. S.S. 58.)

Nov. 21. Tues. Luther came to say a message came that Aunt Susie went early this morning to the "Better Land" about 1:30 A.M. Ada also sent a telephone to the same effect, and later a letter came from her giving particulars. She had been mostly unconscious for about a week. Sarah arrived on Thurs. but they were not sure that her mother was conscious of her presence, or of Hannah Geffroy's or any of the others who came to see her, as she lay mostly with her eyes closed and made no sign. On Sund. morn about 5 o'clock she began having spasms and had seven in all before her death - thereafter took no food nor medicine. Dear sister! your work is done and you have gone to rest! The Father knew best! Have written to Ada, who later sent a letter received from Hester, written from Hong Kong. They have but seventeen more miles of travel by water, and are glad. Howard came in, also, having sent his son Howard in his place to Arizona State Fair. (T.S.R. 34. 2 P.M. 60. S.S. 54.)