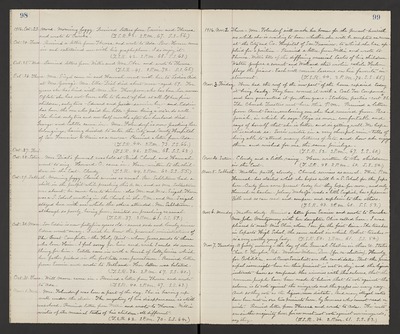 Oct. 26. Thurs. Mrs. Siegel came in and Hannah went with her to Ladies Aid at Mrs. Young's. Mrs. Ella Dial died about noon - aged 59. For years she has lived with Mrs. Geo. Thompson, who has been her nurse. Of late she has not been able to be out of bed at all. Of her five children, only two - Edward and Jesse - survive her - and Eddie has been the one also paid her bills. Jesse being a "ne'sr do well." She lived only two and one-half months after her husband died. George and Estelle came in Mrs. Folendorf is now packing her belongings, having decided to enter the City and County Hospital of San Francisco to train as a nurse. Received a letter from Ada. (T.S.R. 44. 2 P.M. 73. S.S. 66.)

Oct. 29. Sabbath. Morning foggy. Church services as usual. Rev. Sahlstrom had a chill in the pulpit while preaching this A.M. and as Mrs. Sahlstrom was absent, he came here to dinner - also Mr. and Mrs. Siegel. There was a S. School meeting in the Church in the P.M. and Mr. Siegel stayed here with me while the others attended. Mr. Sahlstrom, although so poorly, having fever, insisted on preaching as usual. (T.S.R. 37. 2 P.M. 62. S.S. 59.)

Oct. 30. Mon. Son Eddie is now fortyfive years old seems sad and lonely since Edna went away. I wish he knew the personal ministrations of The Great Comforter - the Holy Spirit - whom Jesus sends to those who love Him. I feel sorry for him and wish I could do something for him - Estelle came in with a bunch of holly berries which her father picked in the foot-hills near Jamestown. Received letter from Eunice and wrote to Portland - Her letter was belated. (T.S.R. 36. 2 P.M. 67. S.S. 60.)

Nov. 1. Wed. Mrs. Folendorf was here a part of the day. She is bearing up will under the strain. The mystery of his disappearance is still unsolved. Received letter from Willie and wrote to Theresa. Willie writes of the musical tastes of his children all different. (T.S.R. 42. 2 P.M. 70. S.S. 64.)

1916. Nov. 2. Thurs. Mrs. Folendorf will make her home for the present here with us while she is waiting to hear whether she will be accepted as nurse at the City and Co. Hospital of San Francisco, to which she has applied for a position - Received a letter from Willie and wrote to Theresa. Willie tells of the differing musical tastes of his children. Walter prefers a cornet and Willard the violin while Helen plays the piano. Each will receive lessons on his favorite instrument. (T.S.R. 44. 2 P.M. 72. S.S. 65.)

Nov. 3. Friday. Have had the roof of the "new part' of the house repaired today it being looky. They have covered it with a Coal Tar Compound and have guaranteed it for three years - Stockton parties - cost $35. The Church Trustees met here this P.M. Received a letter from Aunt Susie enclosing one she had received from Bro. Josiah, in which he says Eliza is more comfortable and says of herself that she is better and is getting well. We hope it is indeed so. Susie writes in a very cheerful vein - tells of being able to attend many lectures of late and how she enjoyed them and wished for me the same privilege. (T.S.R. 52. 2 P.M. 67. S.S. 60.)

Nov. 5. Sabbath. Weather partly cloudy. Church services as usual. This P.M. Hannah has started what she hopes will be a S. School for the Japs here. Only four were present today but they hope for more, and only Hannah as teacher. Johnny Wakasagi reads a little English, has a Japanese Bible and so can read and compare and explain to the others. (T.S.R. 43. 2 P.M. 60. S.S. 53.)

Nov. 6. Monday. Weather cloudy. Received a letter from Eunice and wrote to Eureka. Mrs. John Montgomery with her daughter Olive called here. I was pleased to meet Miss Olive, whom I see for the first time. She teaches in Esparto High School, the same school in which Robert teaches - is a very worthy young lady. (T.S.R. 50. 2 P.M. 61. S.S. 54.)

Nov. 7. Tuesday. A frosty morning - the day of the General Election in these U. States. Chas. E. Hughes, Rep. Woodrow Wilson, Dem. (for re-election), Hanly for Prohibition, and Benson Socialist, are the candidates. But the principal issue right here in this precinct is "wet or dry", and the liquor interests have so confused the wineries with the saloons, that the common people have been made to believe that to vote against the saloons is to vote against the vineyards and the grapes in every way. And so they vote as the liquor men dictate. And many illegal votes have been cast in our two precincts here, by Germans who cannot read or write. Received letter from Theresa and wrote to Ada. The "wets" are in the majority here, for "we must not vote against our vineyards", say they. (T.S.R. 36. 2 P.M. 61. S.S. 53.)