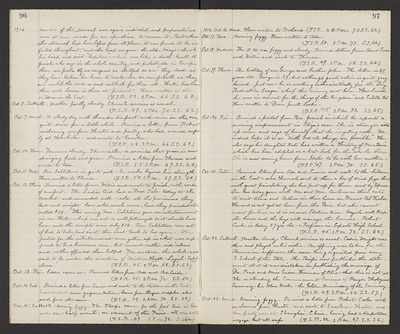 1916. cancer of the stomach was again indicated, and preparations were at once made for an operation to remove it. But when the stomach had been lifted from its place, it was found to be infected throughout, and the head surgeon the elder Mayo - shook his head and said - "hopeless" - which was like a death-knell to Josiah, who says in the whole country, and probably also in Europe there are probably no surgeons as skilful as are they. And so they have taken her home to make her as comfortable as they can until the end - a sad outlook for them all. Hattie has been there and Louise is there at present. Have written to the children in the East. (T.S.R. 52. 2 P.M. 66. S.S. 60.)

Oct. 9. Mond. A cloudy day with thunder tempest and rain in the eve quite severe for a little while. Received a letter from Robert enclosing one from Hester and party, who had arrived safely at Honolulu and wrote to Eureka. (T.S.R. 48. 2 P.M. 66. S.S. 63.)

Oct. 12. Thurs. Received a letter from Willie and wrote to Josiah, with words of comfort. The Ladies Aid had a Food Sale today at the market and succeeded well - sold all the privisions they had and might have sold much more, had they provided it netted $24. This evening Mrs. Sahlstrom gave an entertainment in our Hall, which was not as well patronized as it should have been, and the receipts were only $16. Rev. Sahlstrom rose out of bed to take part in it, then went back to bed again. The posters for the entertainment were gotten up in what was supposed to be a humorous vein, but seemed rather ridiculous and rather offended than helped. For instance, the whole was said to be under the direction of "Mistress Halle-Lujah - Sahlstrom." (T.S.R. 45. 2 P.M. 68. S.S. 63.)

Oct. 19. Thurs. The birthday of son George and brother John. The letter is 60 years old. George is 39, but although quite active is quite grey-haired. Just now he is working enthusiastically for the "Dry Federation League" which this evening end - here. How I wish he was in earnest for "the things of the kingdom" and Estelle too! Have written to Dean Jewett Locke. (T.S.R. 45. 2 P.M. 73. S.S. 65.)

Oct. 20. Fri. Received a postal from Bro. Josiah in which he reports a seeming improvement in Eliza's case. She is stronger sits up more and says of herself that she is getting well. We indeed hope it is so. "With God all things are possible." He also says his daughter Kate has written a "History of Montana" which has been adopted as a text-book for the schools there. She is now coming home from Idaho to be with her mother. (T.S.R. 47 2 P.M. 70. S.S. 65.)

Oct. 21. Satur. Received letters from Ada and Eunice and wrote to the children in the East - also Hannah sent to them a box of dried figs that with great painstaking she has put up for them sent by Express. Lou has today gone with Mr. and Mrs. Ambrose in their auto to visit Alma and Arthur in their home in Fresno Oil Fields. Howard is not got at home from the Fairs, but she cannot wait for him, as it is so near Election time. Myrle will keep the house and the boys will manage the business. Robert Cooke is today 27 yrs old - a Professor in Esparto High School. (T.S.R. 45. 2 P.M. 72. S.S. 62.)

Oct. 22. Sabbath. Weather cloudy. Church services as usual. Cedric Wright was there and played on his violin. An offering was taken for the Armenian sufferers, the same being requested from every S. School of the State. The Pacific now publishes the statement that it was mistaken in publishing the marriage of Dr. Pond and Miss Susan Hinman of Ohio that this is not so. He is attending the Commencement Exercises of Bangor Theological Seminary - his Alma Mater - the Golden Anniversary of the Seminary. (T.S.R. 49. 2 P.M. 64. S.S. 57.)