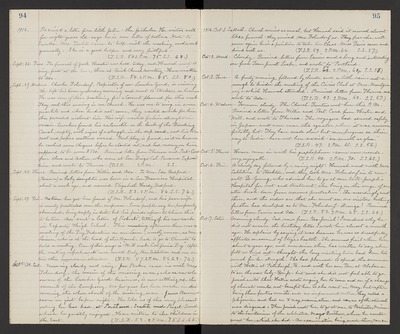 Sept. 27. Wednes. Charles Folendorf, Proprietor of our Lumber Yard, is missing. He left his home yesterday morning and went to Stockton on business He was one of those practising for a Concert planned for this week. They met this evening in our church. He was one to sing in some quartets and when he did not come, they waited awhile for him then proceeded without him. His wife waited for him all night in vain. Searchers found his automobile on the bank of the Diverting Canal, empty, with signs of a struggle in the deep sand, and his torn coat and papers scattered around. Foul play is feared, as it is known he cashed some Cheques before he started out, and had money on him supposed to be some $500. Received letter from Theresa and Post-Card from Alma and Arthur, who were at San Diego Cal. Panama Exposition, and wrote to Theresa. (T.S.R. 2 P.M. S.S.

Sept. 29. Fri. No trace has yet been found of Mr. Folendorf, and his poor wife is nearly prostrated over the suspense - Some people say he purposely absconded, being deeply in debt, but his friends refuse to believe this to be true. Ada sent a letter of Roberts, letting of his new work in Esparto High School. This afternoon there was a meeting of the Dry Federation on our Lawn, mostly women, as Mr. Laisure, who is at the head of this Branch, had to go to Clements to hold a meeting. One of their songs is - "We'll make California Dry". After the meeting refreshments were served. Only Rev. Sahlstrom and one or two other men were in attendance. (T.S.R. 57. 2 P.M. 86. S.S. 76.)

Sept. 30. Sat. Morning cloudy and rainy. Joe Parker came in with Max Tolendorf , the cousin of the missing man, who as now sole owner of the Lumber Yard business, is now settling up the accounts of the Company. No progress has been made in discovering the whereabouts of the missing man - James Hammond came in just before night. He told us of the very pleasant outing he has had, at Portland, Seattle and Puget Sound. which he greatly enjoyed. Have written to the children in the East. (T.S.R. 53. 2 P.M. 75. S.S. 65.)

Oct. 3. Tues. A frosty morning, followed by clouds and a little rain - not enough to hinder the meeting of the Civics Club at Mrs. Montgomery's, which Hannah attended. Received letter from Theresa and wrote to Ada. (T.S.R. 43. 2 P.M. 62. S.S. 57.)

Oct. 4. Wednes. Forenoon cloudy. The Church Trustees met here this P.M. Received a letter from Willie and Post-Card from Hester and Will, and wrote to Theresa - The voyagers had arrived safely in Japan, and were near the equator, where it was uncomfortably hot. They have made slow but sure progress on their way to India - have not been seasick - "sea smooth as glass." (T.S.R. 47. 2 P.M. 61. S.S. 56.)

Oct. 6. Fri. A cloudy day followed by a rainy night - Hannah went with Mrs. Sahlstrom to Stockton, and they took Mrs. Folendorf in to consult Dr. Young, who advised her to go to one to St. Joseph's Hospital for rest and treatment, she being on the verge of an utter break-down from nervous prostration. She accordingly went there, and the orders are that she must see no visitors. Nothing further has developed as to Mr. Folendorf strange! Received letters from Eunice and Ada. (T.S.R. 52. 2 P.M. 65. S.S. 60.)

Oct. 7. Satur. Morning cloudy. Sad news from Bro. Josiah! I wondered why he did not answer the birthday letter I wrote him almost a month ago. He explains by saying it was because he was so dreadfully afflicted on account of Eliza's health. She seemed frail when here about a year ago, and once since then has written to say she felt so tired out - thought the long visiting time had been too much for her strength. She had planned to spend the summer with Hattie at Pittsburgh, Pa - and with her son Ben at Alabama to see the new baby - Ben, Jr - but said she did not feel able to go - Josiah writes that Hattie wrote urging her to come and see if a change of climate would not benefit her. So she went in May, but after being there for two months, and no improvement noted, they called a physician and had an X-ray examination, and cancer of the stomach was diagnosed. Then Josiah wrote her to go at once to Rochester, Minn. to the Sanitarium of the celebrated Mayo Brothers, where he would meet her, which she did. An examination being made thus, cancer