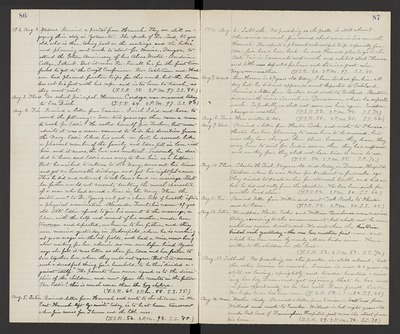 1916. Aug. 2. Wednes. Received a postal from Hannah. They are still enjoying their stay in Yosemite. She speaks of Dr. Pond, 86 yrs. old, who is there, taking part in the meetings and the "hikes" and planning next week, to start for Maine, Bangor, to attend the Golden Anniversary of her Alma Mater - Bowdoin College, I think. But it seems Rev Rowell has for the first time failed to get to the Cong'l Conference. Rev. Sahlstrom and Hubson had planned further trips for this week, but the horse has cut his foot with his rope and is too lame to travel, so they must wait. (T.S.R. 58. 2 P.M. 97. S.S. 80.)

Aug. 4. Fri. Received a letter from Eunice - I wish I did not have to record the following: - Some two years ago there came a man to work for Eddie. He called himself Jim Tucker, but now admits it was a name assumed to hide his desertion from the Navy. Eddie liked his work - in fact, he seemed like a pleasant members of the family, and Edna fell in love with him, and it seems, the love was mutual. Suddenly he decided to leave and Eddie was sorry to lose him as a helper. But he wished to return to the Navy, serve out his time and get an honorable discharge and get his rightful name. This he did and returned to ask Edna's hand in marriage. But her father would not consent, doubting the moral character of a man who had served a term in the Navy. Then the suitor went to Dr. Young and got a "clean bill of health" after a physical examination - Alexander Trent, his name - 29 yrs. old. Still Eddie. refused to give his consent to the marriage, so Edna, with the help and consent of her mother, made her trousseau and departed, unknown to her father, and they were married yesterday in Bakersfield, where he is working at good wages in the oil-fields, and had a nice, new bungalow waiting for her, wherein no one ever before lived. Agnes says she felt it was better so than for Edna and her father to live together here, where they could not agree. But O it seems such a dreadful thing for a household to be thus "divided against itself". The parents have never agreed as to the discipline of, the children, and now I fear the results in the future Poor Eddie! this is much worse than the hog cholera. (T.S.R. 60. 2 P.M. 88. S.S. 75.)

1916. Aug. 6. Sabbath. No preaching as the pastor is still absent - Other services as usual. Jim arrived about noon in his car with Hannah. She reports a pleasant and restful trip, especially for Ada. Jim has a lame back - he and Howard plan to go to the State Fair in Sacramento next month and exhibit stock. Theresa and little ones departed for home and there is a great calm. Very warm weather. (T.S.R. 60. 2 P.M. 97. S.S. 80.)

Aug. 7. Mond. Bro. Horace is 69 years old today. I have looked for him all day but he did not appear, so must departed to Oakland. Received a letter from Benton and wrote to Portland. Benton is now with Susie Cornish in Dunsmuir where he expects work. So probably we shall not soon see him again. Sudden change in weather. (T.S.R. 53. 2 P.M. 84. S.S. 70.)

Aug. 9. Wed. Received a letter from Hester Cooke and wrote to Theresa - Hester has been planning to come here to be married, but now they have changed their plans, because they learn they may have to sail for India sooner than they had supposed and so they fear they shall not have time to come to us. (T.S.R. 50. 2 P.M. 85. S.S. 72.)

Aug. 12. Satur. We suppose Hester Cooke and William Bembower were married today, according to the announcement, but shall not be sure until we receive direct word. We sent them the historic bridal veil yesterday - the one her mother first wore, and which has been worn by nearly all our brides since. Have written to the children in the East. (T.S.R. 52. 2 P.M.83. S.S.72.)

Aug. 13. Sabbath. No preaching as the pastor is still absent, but the other Services as usual. Eunice is now 42 years old still so loving, sprightly and tender-hearted - missing her boy Dean, and yet rejoicing that he has such a fine opportunity as he has with Dean Jewett Locke. We hope to see her here soon. (T.S.R 50. 2 P.M. 84. S.S. 65.)

Aug. 14. Mon. Weather cloudy - Received a letter from Eunice, a PostCard from Willard and wrote to Eureka. Willard but eight years old. sends Post-Card of Farmingham Hospital, just across the street from his home. (T.S.R. 59. 2 P.M. 74. S.S. 70.)