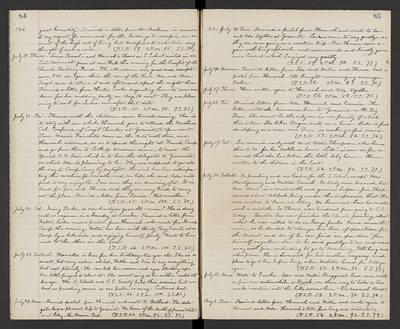 July 20. Thurs. Laura Bruml's and Hannah's Classes in S. School united in an Entertainment given at our Hall this evening for the benefit of the Church Building Fund. The attendance was good and receipts were $30. as I gave them the use of the Hall. Mr. and Mrs. Siegel came to attend it and afterward spent the night here. Received a letter from Hester Cooke requesting leave to use our lawn for her wedding party on Aug. 16 next They are planning to sail for India soon after that date. (T.S.R. 60. 2 P.M. 98. S.S. 85.)

July 21. Fri. Theresa with the children came towards evening. She is to stay with me while Hannah goes to attend the Northern Cal. Conference of Cong'l Churches at Yosemite, to open next Tues. Mamie Fairchild came in the Auto with them, and Hannah returned, so as to spend the night at French Camp and go from there to Lathrop tomorrow morn, to meet the Special R.R. train which is to bear the delegates to Yosemite, on which Ada is planning to be. They are supposed to go all the way to Camp Curry by daylight. Hannah has been anticipating this vacation for months, and we hope she and Ada will find it very enjoyable. I am sure they are deserving of it. It is hard for Jim and Theresa and they are very kind to carry out the plan. Received a letter from Eunice. Hot weather. (T.S.R. 65. 2 P.M. 100. S.S. 82.)

July 22. Sat. Irwing Parker is now twentyone years old - aman! He is doing well as engineer in a laundry at Eureka. Received a letter from Walter Locke and a postal from Hannah, who wrote from French Camp this morning. Walter has been with thirty Boy Scouts at a Camp by a lake-side and enjoying himself finely. Wrote to him and to others in the East. (T.S.R. 66. 2 P.M. 100. S.S. 85.)

July 23. Sabbath. Marcella is here for her birthday, two yrs. old. She is a small, but very active child, talks and tries to say everything but not plainly. She can tell her name and age, sticking up two little fingers to show it - She cannot sing as her mother could at her age. The S. School and C.E. Society held their sessions but we had no preaching service as our pastor is away - Continued heat. (T.S.R. 66. 2 P.M. 100. S.S. 81.)

1916. July 25. Tues. Received a postal from Hannah and wrote to her and Ada together at Yosemite. Laura came to say goodbye as they are soon going on a vacation trip - Bro. Horace came again with his graphonola and more records and kindly gave me a Concert, which I enjoyed very greatly. (T.S.R. 59. 2 P.M. 90. S.S. 77.)

July 28. Fri. Received letter from Ada, Hannah and Eunice. The latter writes she has never been to Yosemite or the Big Trees. She must be the only one in our family of which this is true. She likes Oregon well as a home. Locke is fast developing as a man and Dean is making a fine record. (T.S.R. 53. 2 P.M. 86. S.S. 76.)

July 30. Sabbath. No preaching and no leaders for the S. School, except Mrs. Montgomery and Milton Cusick. We truly seem bereaved, but Mrs. Mont. is a most noble and gracious helper - Jim Thorp arrived about 10 o'clock, being render the impression that Theresa wished to leave us today. We know not how he made such a mistake. So Theresa was hindered from going to S. S. today - Benton has now finished the Church painting, also what he was called to do on George Jacks' house across the river, so he decided to change his base of operations for the present and see if he can find "an open door" for himself anywhere else. So he said goodbye to us and went away with Jim, intending to go to Martinez, Pittsburg and other places - He is homesick for his mother, anyway, and plans to go to her before long, when Webster leaves for College again. (T.S.R. 55. 2 P.M. 92. S.S. 77.)