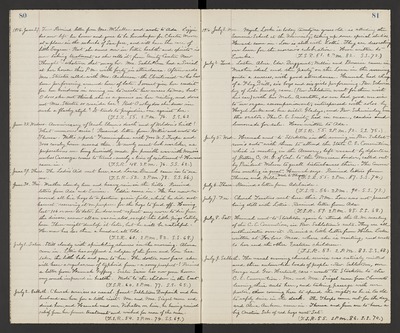 1916. June 27. Tues. Received letter from Mrs. McLellan and wrote to Ada. Lizzie has now left her home and gone to be housekeeper for Chester Moore at a place in the suburbs of San Jose, and will have the care of little Eugene. But she seems now in better health and spirits - is now taking treatment, as she calls it, from "Unity Center New Thought" - whatever that may be. Mrs. Sahlstrom had a Social at her house this P.M. with forty in attendance. Afterwards Mrs. Streeter called with Mrs. Anderson - the Elocutionist who has been performing around here of late. I must give her credit for her kindness in coming in to recite her verses to me, but O does she not think she is a genius in her reciting, and does not Mrs. Streeter so consider her? But O why does she dress in such a flashy style? It tends to prejudice one against her. (T.S.R. 55. 2 P.M. 76. S.S. 62.)

June 28. Wednes. Anniversary of Uncle Elmer's death and of Weldon's birth! What memories arise! Received letter from Willie and wrote to Theresa. Willie reports Framingham with 7000 U.S. Troops and 3000 cavalry horses massed there. It surely must look warlike, as preparations are being hurriedly made for possible war with mixer's unless Carranza comes to terms - surely a time of excitement! Howard came in. (T.S.R. 48. 2 P.M. 76. S.S. 62.)

June 30. Fri. Weather cloudy here and heavy rain in the hills. Received letters from Ada and Eunice. Eddie came in. He has now removed all his hogs to a posture grain-field, which he did not harvest, reserving it on purpose for the hogs to feed off. Having lost 106 or over to date, he does not expect any more to die from the disease, as now all are vaccinated, except the little pigs lately born. Then might develop it later, but he will be watchful. He now has less than a hundred all told. (T.S.R. 60. 2 P.M. 82. S.S. 68.)

July 1. Satur. Still cloudy with sprinkling showers in the morning. Alma came in - Lottie has suffered a relapse of the fever and Lou has taken the little babe and gone to her. The doctor now fears she will have a regular run of typhoid fever - a sorry prospect! Received a letter from Hannah Geffroy - Sister Susie has now gone home very much improved in health - Wrote to the children in the East. (T.S.R. 60. 2 P.M. 77. S.S. 65.)

1916. July 3. Mon. Myrle Locke is today twentyone years old - is attending the Summer School at the University, taking up some special studies. Howard came in - Lou is still with Lottie. They are decorating our lawn for the morrow's celebration. Have written to Eureka. (T.S.R. 51. 2 P.M. 82. S.S. 72.)

July 4. Tues. Luther, Alice, Edw. Bergquest, Nellie and Bernice came in. Weather ideal, and the party on the Lawn in the evening quite a success, with good attendance. Hannah had charge of a Flag Drill, six boys and six girls performing. Rev. Schwimley of Lodi kindly came (Rev Sahlstrom went for them with his car) with his Male Quartette, so we had good music to our organ accompaniment, interspersed with solos by Hazel Locke and her sister Gladys, and Rev. Schwimley was the orator. The C.E. Society had ice cream, candies and lemonade for sale. Have written to Ada. (T.S.R. 55. 2 P.M. 92. S.S. 75.)

July 5. Wed. Hannah went to Stockton in the evening in Rev. Sahlstrom's auto with them to attend the State C. E. Convention which is meeting in the Armory, left vacant by departure of Battery C.N.G. of Cal. to the Mexican border, called out by President Wilson to quell disturbances there. The Convention meeting is great, Hannah says. Received letter from Theresa and Willie. Wrote to Theresa. (T.S.R. 55. 2 P.M. 87. S.S. 74.)

July 8. Sat. Hannah went to Stockton again to attend the A.M. meeting of the C.E. Convention, in Rev. Sahlstrom's auto. They are all enthusiastic over it. Received a little letter from Helen Locke written at Foxboro, Mass. where she is visiting, and wrote to her and the other Eastern children. (T.S.R. 53. 2 P.M. 83. S.S. 68.)

July 9. Sabbath. The usual evening church service was entirely omitted and three automobile loads of people - Rev. Sahlstrom, our George and Geo. Hartwell cars - went to Stockton to the C. E. Convention. Mr. and Mrs. Siegel came from Clements leaving their auto here, and taking passage with our pastor, then coming here to spend the night, as he is too old to safely drive in the dark. The Thorps came out for the day and Alma Ambrose came in. Theresa and Jim are to have a big Auction Sale of red hogs next Sat. (T.S.R. 55. 2 P.M. 86. S.S. 70.)