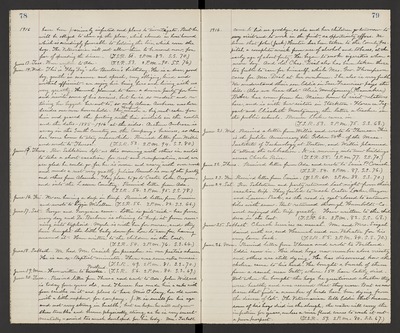 1916. have been previously infected and plans to investigate. But he will be obliged to clean up the place, which abounds in hoar-hound which is exceedingly favorable to holding the lice, which cover the hogs. The Veterinarian will not allow them to be moved now, for fear of spreading the disease. (T.S.R. 50. 2 P.M. 83. S.S. 70.)

June 14. Wed. This is "Flag Day" - also Bentone's birthday. He is a dear, good boy, gentle in manner and speech, very obliging, kind and withal efficient - we enjoy his being here and living with us very greatly. Hannah planned to have a dinner party for him and invite some of his cousins, but he is so modest and retiring he begged her not to, so only Alma Ambrose was here besides our own house hold. She Hannah made a big nut-cake for him and graced the frosting with his initials in the center and the dates - 1885-1916 - at the sides. Arthur Ambrose is away in the South Country on the Company's business, so Alma has come home to stay meanwhile. Received letter from Willie and wrote to Theresa. (T.S.R. 52. 2 P.M. 94. S.S. 80.)

June 15. Thurs. Rev. Sahlstrom left us this morning with others in autos to take a short vacation for rest and recuperation, and we are glad he could go, for he is "worn and weary" with over work and needs a rest very greatly. Julius Bruml is one of the party and others from Alameda. They plan to go to Crater Lake, Oregon, and into the Lassen Country. Received letter from Ada. (T.S.R. 56. 2 P.M. 95. S.S. 78.)

June 17. Sat. George and Georgiana came. Lottie is quite sick - has fever every day and Dr. Barbour is striving to keep it from running into typhoid. Myrle is with her for nurse, and they have brought the little baby down for Lou to care for, having weaned it. Have written to the children in the East. (T.S.R. 54. 2 P.M. 76. S.S. 64.)

June 20. Tues. Received letter from Theresa and wrote to Ada. John Willard is today four years old, and Theresa has made him a cake with four candles on it and plans to have Miss O'Leary, her old nurse, with a little nephew, for company J.W. is small for his age and not very strong in health, but we hope he will out grow these troubles and become physically strong, as he is very smart mentally - mind too much developed for his body. Mrs. Tarbell

1916. came to bid us goodbye, as she and her children go tomorrow to visit and to work in the fruit, as opportunity offers. We earn that John (Jack) Hunter has been taken to the County Hospital, a complete wrick from use of alcohol and tobacco, at the early age of about forty. He began to smoke cigarettes when a mere boy. And old Chas. Dial also has been taken there too feeble to care for himself, which Mrs. Geo. Thompson cares for Mrs. Dial at her own home. She also is very feeble. We understand their son Eddie in San Francisco pays the bills. Also we hear that Alice Montgomery (Hamaker) Barber has come from her Maine home to visit relatives here, and is with her sisters in Stockton - Florence Taggart and Elisabeth Montgomery, the latter a teacher in the public schools. Bernice Locke came in. (T.S.R. 53. 2 P.M. 75. S.S. 68.)

June 21. Wed. Received a letter from Willie and wrote to Theresa. This is the Jubilee Anniversary the Golden 50th - of the Mass. Institute of Technology at Boston, and Willie planned to attend the celebration. It is moving into new buildings across Charles River. (T.S.R. 55. 2 P.M. 77. S.S. 70.)

June 24. Sat. Rev. Sahlstrom and party returned last night from their vacation trip. They failed to reach Crater Locke, Oregon and Lassen Peak, as the road is yet closed to automobiles with snow. But returned through Humboldt Co. and enjoyed the trip greatly. Have written to the children in the East. (T.S.R. 62. 2 P.M. 82. S.S. 68.)

June 26. Mon. Received letter from Theresa and wrote to Portland. Eddie came in - His dead hogs now number above ninety and others are still dying. He has discovered how the cholera came to his herd. He bought a bunch of them from a ranch near Galt, where 150 have lately died. But when he bought the hogs he questioned whether they were healthy and was assured that they wore. But we not learn that quite a number of herds have been dying form the disease of late. The Veterinarian tells Eddie that because some of his hogs died in the slough, the water will carry the infection for years, unless a river flood comes to wash it out a poor prospect. (T.S.R. 59. 2 P.M. 80. S.S. 67.)