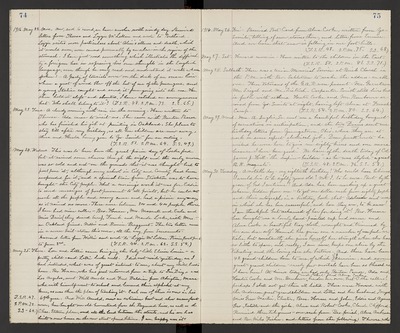 1916. May 22. Mon. Now, sad to record, we have another north windy day. Received letters from Theresa and Lizzie McLillan and wrote to Portland. Lizzie write more particulars about Alice's illness and death, which it would sum, were caused presumably by an ulcer in the region of the stomach. I have just read something which illustrates the difficulty a foreigner has in expressing his own thoughts in the English language, even though he may read and understand it well when spoken! - A party of tourists were on the deck of an ocean liner when a gust of wind blew off the hat of one of the passengers, and a young Italian caught and saved it from going into the sea. He then held it aloft and shouted, "I have catched an anonymous hat. Who shall belong to it?" (T.S.R. 48. 2 P.M. 73. S.S. 65.)

May 23. Tues. A cloudy morning with rain in the evening. Have written to Theresa. Ada came to visit us. She came with Benton Pascoe who has finished his job at painting in Oakland. She plans to stay till after my birthday, as all her children are now away, Alma and Hester having gone to Yo-Semite for an outing. (T.S.R. 51. 2 P.M. 64. S.S. 49.)

May 24. Wednes. This was to have been the great picnic day of Lockeford but it rained some showers through the night and the early morn was so cold and wet on the grounds that it was thought best to postpone it, although every school in City and Country had been suspended for it, and a special train from Stockton was to have brought the City people. What a morning's work it was for Eddie to send messages of postponement to all points, but he could not reach all the people and many came and had a picnic any way, as it rained no more. There were between 300 and 400 people there I have had nine callers - Bro. Horace, Mrs. Maxwell and Eula and Miss Davis (they dined here), Frank and Maude Locke, with Mrs. - an Oakland friend, Nellie and Bernice Bergquert. The two latter came in a severe hail-storm this morn, all the way from Sacramento. Received letter from Willie and wrote to Lizzie McLellan. Picnic postponed to June 3rd. (T.S.R. 44. 2 P.M. 62. S.S. 54.)

May 25. Thurs. Lou and Lottie came bringing the baby - little Elinor Louise - a pretty child - and Lottie looks well. I did not write yesterday, as I had intended, what was a great interest to me, about my childhood's home, Bro. Horace, who has just returned from a trip to San Diego and Los Angeles, met Will Arnold and Fred Baldwin from Abington, Mass. who, with himself went to school and learned their alphabet at my knee, as was then the plan of teaching it. Each one of them is now in his 69th year. And Will Arnold, now an extensive book and shoe manufacturer, has bought an old homestead from the Raymond heirs, as well as the Chas. Stetson place, and all the land between the streets, and his son has built a new house on the new street opened between. I am happy over it. (T.S.R. 47. 2 P.M. 72. S.S. 64.)

May 28. Sabbath. There was a Union Memorial Service at Brick Church in the P.M. with Rev. Sahlstrom to make the address - an able one. Three Veterans of the G.A.R. were present - Mr. Garretson Mr. Siegel and Mr. Dietrich. Carpenter Smith still lives but is feeble with asthma Hester Cooke and Mr. Bembower arrived from Yo-Semite at night, having left Alma at French Camp. (T.S.R. 54. 2 P.M. 80. S.S. 64.)

May 29. Mond. Mrs. A. Inglis, Sr. sent me a beautiful birthday bouquet of carnations in anticipation, and the two Deans sent one birthday letters from Youngstown, Ohio, where they are at work on some expert electrical job. Dean Jewett wrote he wished he were here "to give me eighty kisses and one more because I have been good". We learn of the death today of Col James J. Hill - "the empire-builder" - as he was styled - a great R.R. Magnate. (T.S.R. 48. 2 P.M. 76. S.S. 58.)

May 30. Tuesday. A notable day - my eightieth birthday! Who could have believe I would live to be eighty years old? Not I, to be sure. But by the grace of God I continue! And Ada has been working up a great scheme, hidden from me - to get one dollar each from eighty people and their autographs in a birthday book that Adelaide sent me, in which she has been successful, and here they are, to be sure! I am thankful but ashamed of her for doing it! Bro. Horace has brought me a lovely, hand-painted cup and saucer and Alma Cooke a beautiful tray-cloth, wrought and trimmed by her own dear self. Hannah has given me a number of useful articles, but constantly she gives herself, her strength when she has so little to spare, and really, I am sure, keeps me alive by the Vibrating and the loving care she bestows - And there have been 42 grand-children born to me, of which 33 survive, and seven great-grand children - surely few mortals have been so blessed as I have been! At dinner today we had only Benton Pascoe, Ada and Hester Cooke and Mr. Bembower and Robert and Alma Cooke besides our own, but O the callers! perhaps I shall not get them all listed. There were Howard with the Anderson great-grand children and Lottie and her husband, Myrle, Miss Grace Martin, Chester, Bros. Horace and John, Eddie and Agnes Geo., Estelle and the girls, Alma and Robert Cooke, Claude Clifford. Received three telegrams - one each from Bro. Josiah, Alma Ambrose and Rev. Miles Fisher, and letters from the following! Theresa, who