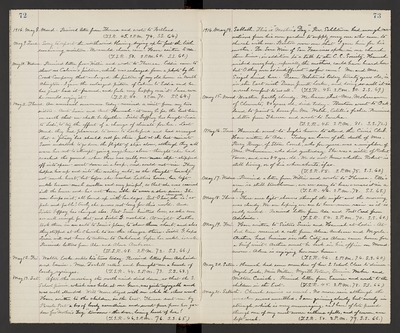 May 10. Wednes. Received letter from Willie and wrote to Theresa. Eddie came to show us Calvin's picture, which was enlarged from a photo by the Coast Company that enlarged the picture of my old home in North Abington. I gave the enlarged picture of Calvin to Eddie and he has just had it framed, and feels very happy over it. I was sure he would enjoy it. (T.S.R. 44. 2 P.M. 70. S.S. 64.)

May 11. Thurs. An unusual occurrence today - received a visit from my two sisters - Aunt Susie and Aunt Hannah - it may be for the last time on earth that we shall be together. Sister Geffroy has brought Susie to Lodi, to try the effect of a change of climate for her. Last Mond. they had planned to come to Lockeford and had arranged that a jitney bus should call for them. Just at the last minute Susie undertook to go down the flight of steps alone, although they all warn her not to attempt going anywhere alone - thought she had reached the ground when there was really one more step - stepped off into space - went down in a heap, and could not rise. They helped her up and into the waiting auto, as she thought herself not much hurt, but before she reached Luther's house, her left ankle became much swollen and very painful, so that she was carried into the house and has not been able to wear a shoe since. She non-limps on it, all bound up with bandages. But O how changed she is! so pale and fable! truly she seems not long for this world. And Sister Geffroy has changed also. But Susie knitted lace, as she can see well enough for that, and Sister G. crocheted. At night Luther took them in an auto to Susie's place, to show them about, and also they stopped at the church to see the changes there. Sister G. hopes Susie will not have to return to Oakland before her ankle is well. Received letters from Ada and Alma Ambrose. (T.S.R. 48. 2 P.M. 72. S.S. 66.)

May 13. Sat. After the morning the north wind died down, so that the S. School picnic, which was held at our Grave, was quite enjoyable and was well attended. Will Moore stayed with me while the others went. Have written to the children in the East. Theresa sent me by Parcels Post a box of lovely carnations and sweet peas from her garden for "Mother's Day" tomorrow - the dear, loving heart of her! (T.S.R. 46. 2 P.M. 76. S.S. 65.)

1916. May 14. Sabbath. This is "Mother's Day." Rev. Sahlstrom had enough carnations from his own garden to supply every one who came to church with me - Benton wore one that I gave him for his mother. Dr. Sara Wise of San Francisco spoke in our church three times, in addition to a talk to the C.E. Society. Hannah wished everybody, especially the mothers, could have heard her but O they were so indifferent - so few came! Mr. and Mrs. Siegel dined here - Dean Webster is today twenty years old, is in the East with Dean Jewett Locke, and doing so well it is a real comfort to us all. (T.S.R. 45. 2 P.M. 80. S.S. 69.)

May 16. Tues. Hannah went to Inglis home to attend the Civic's Club. Have written to Ada. Today we learn of the death of Mrs. Perry Breeze, of Stone Corral, who for years was a neighbor of Mrs. Mohrmann, who died yesterday. She was a sister of Robert Vance, and was 84 yrs-old. We do not know whether Robert is still living, or of his whereabouts, if so. (T.S.R. 55. 2 P.M. 75. S.S. 60.)

May 18. Thurs. There were light showers through the night and the morning was cloudy. We are hoping we are to have more rain as it is sadly needed. Received letter from Ada and Post-Card from Adelaide. (T.S.R. 54. 2 P.M. 70. S.S. 60.)

May 19. Fri. Have written to Sisters Susie and Hannah at Lodi. At bed time received a call from Alma Ambrose and Myrle. Arthur had business in the City, so Alma came home for a brief visit. Arthur must be back in his office on Mond. morn. Alma is enjoying her new home. (T.S.R. 46. 2 P.M. 76. S.S. 60.)

May. 21. Sabbath. Church services as usual. No more rain although the weather seems unsettled. I am gaining slowly but surely in strengh, which is very encouraging, as I have of late passed through one of my most severe asthma spells, and of course, am left weak. (T.S.R. 50. 2 P.M. 79. S.S. 66.)