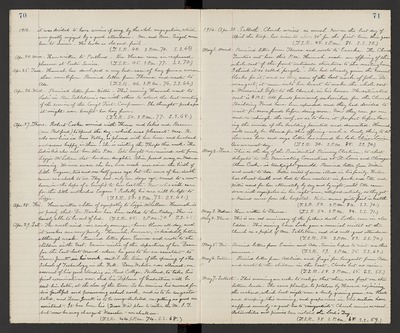 Apr. 26. Wed. Received letter from Willie - This evening Hannah went to Lodi in Rev. Sahlstrom's car with others to attend the last meeting of the session of the Cong'l Dist. Conference. She thought perhaps it might even benefit her hay fever. (T.S.R. 50. 2 P.M. 77. S.S. 68.)

Apr. 27. Thurs. Robert Cooke arrived with Theresa and babies and Beacon (Mrs. Bedford) to spend the day - which was pleasant. Mrs. B. who now lives in Grass Valley, is pleased with her home and husband and seems happy in them. She is visiting the Thorps this week. The Ladies Aid also met here this P.M. Late tonight we received note from Lizzie McLellan that her dear daughter Alice passed away on Wednes. morning. we were aware she has been weak ever since the birth of little Eugene, two and one half years ago, but the news of her death came as a shock to us. They had, only ten days ago, moved to a new home, in the hope of a benefit to her health. Now who will care for the little motherless Eugene? Probably his care will be left to Lizzie. (T.S.R. 50. 2 P.M. 73. S.S. 62.)

Apr. 29. Sat. The north wind - our windy scourge, - have blown all day, and it makes me very poorly. Hannah, however, is decidedly better although weak. Received letter from Eunice and wrote to the children in the East. eunice writes of the departure of her Dean for the East last Mond. where he goes to be an assistant to Dean Jewett in his work, until the time of the opening of the Schools of Technology in the Fall. Dean Webster was allowed, on account of his good standing in Reed College, Portland, to take his final examinations now, and his Diploma of Graduation will be sent him later, at the close of the term. So he receives his rewards for his faithful and persevering school work, and is to be congratulated, and Dean Jewett is to be congratulated on getting so good an assistant. It has been his (Dean W.'s) plan to enter the M.I.T. but now he may change to Worcester - we shall see. (T.S.R. 44. 2 P.M. 74. S.S. 68.)

May 1. Mond. Received letter from Theresa and wrote to Eureka. The Church Trustee met here this P.M. Hannah made an offering of the whole cost of the front entrance structure to the meeting house. I think it is called "pergola". She had already given the cement blocks for it, and as they were of the last work of John Demangeot, it came into her heart to make the whole cost a Memorial Gift, to the Church in his honor. The estimated cost is $125. All funds previously subscribed for the Church Building Fund have been expended and they had decided to wait for more funds before doing more. Now they can go on and re-shingle the roof, so as to have it perfect before having the inside of the building painted and decorated. Hannah will surely be blessed for this offering - such a lovely thing to do! Lou was here and says Lottie has named her babe Elinor Louise. Our warmest day. (T.S.R. 30. 2 P.M. 85. S.S. 70.)

May 2. Tues. This is the day of the Presidential Pimary Election, to elect delegates to the Nominating Conventions at St. Louis and Chicago. Alma Cooke is twentyeight years old. Received letter from Willie and wote to Ada. Willie writes of severe illness in his family. Helen has throat trouble and had to have constant ice pack, and Etta and Willie cared for her alternately by day and by night, until Etta came down with erysipelas in her right arm, collapsed entirely, so they got a trained nurse from the hospital. Helen seems quite frail in health. (T.S.R. 52. 2 P.M. 84. S.S. 70.)

May 4. Thurs. This is our sad anniversary of the father's death. Luther came in also Eddie. This evening Edna Locke gave a musical recital at the Church as a pupil of Mrs. Sahlstrom, and did well-good attendance. (T.S.R. 50. 2 P.M. 83. S.S. 74.)

May 7. Sabbath. This morning we woke to realize that there was frost on the bottom lands. The acres planted to potatoes by Howard adjoining the orchard, which last night were a lovely growing green, are black and drooping this morning, and grape vines in this section have suffered severely - a great loss to vineyardists. Church services as usual. Automobiles and picnics have violated the Lord's Day. (T.S.R. 35. 2 P.M. 68. S.S. 59.)