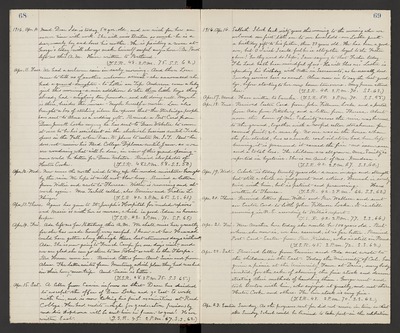 Apr. 11. Tues. We had a welcome rain in early morning. And then Lou came to tell us of another welcome arrival - she announced she had a grand-daughter - to Lottie an Tip Anderson came a baby girl this morning - a nice addition to the three little boys they already had - weighing ten pounds, and all doing well Myrle is there, besides the nurse - Myrle herself a nurse. Lou also brought a box of sterling silver tea-spoons that the Starbridge people have sent to Alma as a wedding gift. Received a Post-Card from Dean Jewett Locke saying he has sent to Dean Webster to come at once to be his assistant in the electrical business until Tech. opens in the Fall, when Dean W. plans to enter M.I.T. But he does not receive his Reed College Diploma until June, so we are wondering what will be done, in view of this grand opening - none could be better for Dean Webster. Received also photos of Hester Cooke. (T.S.R. 48. 2 P.M. 58. S.S. 50.)

Apr. 12. Wed. Now comes the north wind to dry up the needed moisture brought by the rain. We hope it will not blow long. Received a letter from Willie and wrote to Theresa. Willie is recovering and at work again. Mrs. Tarbell called, also Bernier and Gratia L. Klinger (T.S.R. 42. 2 P.M. 65. S.S. 61.)

Apr. 14. Fri. Ada left for Pittsburg this A.M. We shall miss her greatly for she has made herself very useful. I know not how Hannah could have gotten along through these last strenuous days without Ada. She is now going to French Camp for one day's visit, and we are glad she can go there to see Robert as well as the Thorps. Bro. Horace came in. Received letters from Aunt Susie and from Alma. The latter writes from Monterey, which place they had reached in their honey-moon trip. Aunt Susie is better. (T.S.R. 48. 2 P.M. 75. S.S. 65.)

Apr. 15. Sat. A letter from Eunice informs us that Dean has decided to accept the office of Dean Locke and go East to work with him, and is now taking his final examinations at Reed College. He had credits enough for graduation previously and his Diploma will be sent him in June. - so good! Have written East. (T.S.R. 45. 2 P.M. 67. S.S. 62.)

1916. Apr. 16. Sabbath. I look back sixty years this morning to the morning when we welcomed our first little one to our household - our Luther Jewett - a birthday gift to his father, then 33 years old. He has been a good son, but O I wish could feel he is altogether loyal to the Father above! "In thy word do I hope", I am saying to that Father today. "The Lord hath been mindful of us - He will bless us". Luther is spending his birthday with Nellie in Sacramento, as he usually does. Sunday services here as usual. Alma came in to say the last goodbye, before starting to her new home tomorrow. May peace attend her! (T.S.R. 40. 2 P.M. 70. S.S. 63.)

Apr. 18. Thurs. Received Easter Card from John Fillmore Locke and a postal from Ada from Pittsburg and a letter from Theresa. About noon the home of Mr. Schmitz across the river was burned to the ground, together with a roofed cellar storehouse for canned fruit, &.c. near by. No one was in the house when the fire started, bus as a small coal-oil stove had been left burning, it is presumed it caused the fire - no insurance and a total loss - The children are all grown Mrs. Smitz is reported in hysterics. She is an Aunt of Mrs. Knudsen. (T.S.R. 42. 2 P.M. 67. S.S. 60.)

Apr. 22. Sat. Received letters from Eunice and Ada and wrote to the children in the East. Today the University of Cal. has given a picnic at the University Farm at Davis, every body invited, for the sake of showing the fine stock and demonstrating their methods of handling them. George went and took Benton with him, who enjoyed it greatly, and met there Hester Cooke and others. The live stock is very fine. (T.S.R. 43. 2 P.M. 70. S.S. 62.)

Apr. 23. Easter Sunday. As the programs sent for did not arrive in time so that the Sunday School could be trained to take part in the celebration