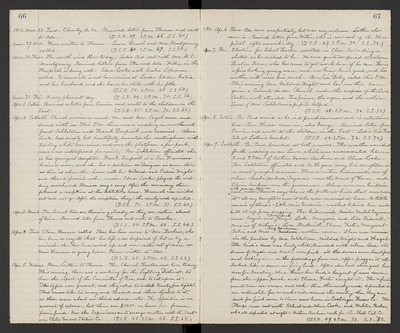 Mar. 30. Thurs. The north wind blew today. Ladies Aid met with Mrs. W. S. Montgomery. Received letters from Etta and Ada. Willie, in the Hospital, is doing well. Edna Locke with Gratia Lopeman called. It seems all is not harmonious at Linden between Gratia and her husband, and she leaves her child with his folks. (T.S.R. 50. 2 P.M. 68. S.S. 64.)

Apr. 2. Sabbath. Church services as usual. Mr. and Mrs. Siegel came and dined with us. This P.M. there was a wedding in our church. Janet Sahlstrom and Frank Doupnik were married. Alma Locke had simply but beautifully decorated the meetinghouse with trailing white rose vines, and over the platform a few pink roses were interspersed for variety. Rev. Sahlstrom officiated - she is his youngest daughter. Frank Doupnik is a San Francisco business man, and she has a position as Designer in some store so there is where their home will be. Mildred and Cedric Wright were there to furnish violin music, Edna Locke played the wedding march, and Bernice sang a song. After the ceremony there followed a reception at the Sahlstrom home. Hannah was invited but did not go. After the reception they - the newly-weds departed. (T.S.R. 51. 2 P.M. 71. S.S. 62.)

Apr. 5. Wednes. Have written to Theresa. The Church Trustees met here today. This evening, there was a meeting for the Lighting District, to hear the report of the Committee of Five, and to act upon it. Thirtyfive were present, and they voted to install twentyfive lights. That seems like too many, and Howard and others objected to it, so there were about one-third adverse votes. The opposition is on account of expense, but there are $1200. on hand from former picnic funds. Now the Supervisors are to arrange matters with the Western States Gas and Electric Co. (T.S.R. 45. 2 P.M. 68. S.S. 65.)

Apr. 7. Fri. Election for School Trustee resulted in Chas. Weber being re-elected, as he wished to be. We were quite surprised to welcome Benton Pascoe, who has come to get work here, if he can. He is a fine looking young man, and we know he is good, and his mother will miss him much. Amelia Daley called this P.M. This evening Mrs. Mildred Wright and her mother have given a Concert in our Church under the auspices of the Civic Center, well attended. Two pianos, the organ and the violin. Some of Mrs. Sahlstrom's pupils helped. (T.S.R. 48. 2 P.M. 76. S.S. 71.)

Apr. 9. Sabbath. Dr. Pond preached at both services. The weather was ideal for the wedding on our Lame, which was consumenated between 2 and 3 P.M. of Arthur Warren Ambrose and Alma Locke. Rev. Sahlstrom officiated and N.H. gave away his daughter in a most graceful manner. There were ten bridesmaid, one of whom - Maber (Ambrose) Seymour - was the Maid of Honor, and Oliver Ambrose was the groomsman. Alma wore our historic with orange blossoms veil, and Theresa says she is the prettiest bride that ever wore it - all my daughters wore it who were married at home. A little cousin of Alma's - little Miss Goodwin - walked behind her and held it up from dragging. The bridesmaids, besides Mabel Seymour were Myrle and Edna and Hazel Locke, Marjorie and Lida Bidwell - cousins of Arthur's - Lora Beckwith, Elvera Foote, Margaret Sabin and Miss Inez Handerson, another cousin. There was music in the parlors by Mrs. Sahlstrom, Mildred Wright and Hazel. The bride's dress was lovely white, trimmed with silver lace the dresses of Myrle and Mabel were pink - all the dresses were beautiful and looking down on the proceedings from our upper piazza, it all looked like a scene in fairy land. After she had changed her dress for traveling, Alma threw her bride's bouquet of roses down from the upper porch and Elvera Foote caught it. The refreshments were ice cream and cake - then the newly - weds departed in an automobile for a week's ride around the country - then they come back for final move to their new home in Coalinga, Fresno Co. The Thorps came out with Robert and Alma Cooke and Webster Parker who all departed at night. Arthur Ambrose works for the Shell Oil Co. (T.S.R. 49. 2 P.M. 76. S.S. 72.)