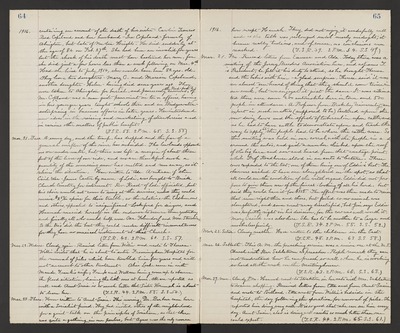 1916. containing an account of the death of her sister - Caroline Trances Reed Copeland and her husband - Ira Copeland - formerly of Abington, but late of Newton Heights. He died suddenly at the age of 84 on Feb. 27th. She had been an invalid for years but the shock of his death must have hastened her own, for she died just a few hours less than a week following, on Mar. 4th. Had she lived to July, 1916, she would have been 82 yrs. old. They leave two daughters - Mary C. and Marian Copeland, another daughter - Helen - having died some years ago. They were taken to Abington for burial, and James only survives, of the Reed family's Mr. Copeland was a man quite prominent in town affairs, having in his younger years taught schools there and in Bridgewater - enterprising in business affairs in later years. He introduced new ideas in the raising and marketing of strawberries and in various other matters of public benefit. (T.S.R. 55. 2 P.M. 65. S.S. 55.)

Mar. 21. Tues. A sunny day, and the temp. has dropped and the fear of a general overflow of the river has subsided. The lowlands opposite us are under water, but there was left a margin of about three feet of the lever of our side, and we are thankful such a quantity of the menacing snow has melted and run away, as it relieves the situation. Have written to Ada. A veteran of the Civil War - James Carter by name - of Lodi, was brought to Brick Church Cemetery for interment. Rev. Keast of Lodi officiated, but his choir would not come to sing at the services, unless they could receive $250/100 a piece for their trouble, so the relatives the Eddlemons and others, appealed to insignificant Lockeford for singers, and Hannah wearied herself in the endeavor to secure theme yesterday and finally all who would help were Mr. Folendorf and Mrs. Struter. So the trio did the best they could under difficult circumstances for they have no musical instrument at that Church. (T.S.R. 42. 2 P.M. 60. S.S. 57.

Mar. 22. Wednes. Cloudy again. Received letter from Willie and wrote to Theresa. Willie writes that he is about to enter Framingham Hospital for the removal of piles which have troubled him for years and will not succumb to other treatment. Alice Locke came in with Mande Frank's wife, Frank and Wallace having come up to observe the flood situation, leaving the little ones at home. All are reported as well and Aunt Susie is so much better that Sister Hannah is about to leave her. (T.S.R. 44. 2 P.M. 55. S.S. 54.)

Mar. 23. Thurs. Have written to Aunt Susie. This evening, Dr. Barbour came here with a Socialist friend. They had invited others of the neighborhood for a quiet talk on the principles of Socialism, so that there was quite a gathering in our parlors, but Agnes was the only woman

1916. here except Hannah. They did not enjoy it wonderfully well and as the talk was prolonged until nearly midnight, it became really tedious, and of course, no conclusions were reached. (T.S.R. 59. 2 P.M. 54. S.S. 49.)

Mar. 24. Fri. Received letters from Eunice and Ada. Today there was a meeting of the Jersey Breeders Association here, and as James T. is President, he felt it his duty to attend, so he brought Theresa and the babies with him - a glad surprise, Theresa said "it was an almost un-heard of thing that they should come twice in one week", but we enjoyed it just the same. It was estimated there were some 200 automobiles here in town and 500 people in attendance. A Professor from Berkeley University, an expert in such matters (supposed to be) lectured upon the new dairy laws and the effects of tuberculin upon cattle, and as he had to have cattle to demonstrate upon and teach the way to apply it the people had to be where the cattle were. So the meeting was held in our corral, with the people in and around the autos, and quite a number climbed upon the roof of the big barn and saw and heard from that vantage point, while Prof. Roadhouse stood in an auto to lecture. Three cows responded to the test, one of them being one of Eddie's best. The observers wished to have one slaughtered on the spot, so that all could see the condition of the vital organs. Eddie did not propose to give them one of the finest-looking of all his herd, but said they could have it for $125. The effort was then made to raise that seem right then and there, but failed so no animal was slaughtered, and some went away dissatisfied, but Jim says Eddie was perfectly right in his decision, for the cow was well worth it. Mary Cusick was also here. She has to be mother to a large and motherless family. (T.S.R. 34. 2 P.M. 55. S.S. 52.)

Mar. 26. Sabbath. This A.M. the preaching service was a union one at the M.E Church with Rev. Sahlstrom as preacher. People remark they cannot understand how he can preach so well when he is working so hard all the week on the Meetinghouse. (T.S.R. 43. 2 P.M. 66. S.S. 63.)

Mar. 27. Mon. Cloudy P.M. Hannah went to Stockton in her auto with Mrs. Sahlstrom to do some shopping - Received letters from Etta and from Aunt Susie and wrote to Portland. Etta wrote from Willie's bedside in the hospital, the day following the operation for removal of piles. She reported him doing very well. It is so good that she can see him every day. Aunt Susie, also is doing well - writes so much better than one could expect. (T.S.R. 44. 2 P.M. 65. S.S. 61.)