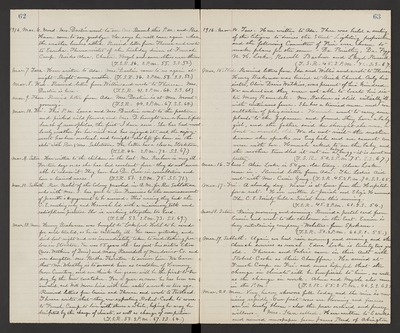 1916. Mar. 6. Mond. Mrs. Dustin went to see Mrs. Bruml this P.M. and Bro. Horace came to say goodbye. He says he will come again when the weather becomes settled. Received letter from Theresa and wrote to Eureka. Theresa writes of the birthday dinner at French Camp. Besides Alma, Chester, Hazel and some others were there. (T.S.R. 36. 2 P.M. 55. S.S. 52.)

Mar. 10. Fri. This P.M. Laura and Mrs. Dustin went to the pasture and picked wild flowers, and Mrs. D. brought me a beautiful bunch of nemophilas, the first I have seen. She has had most lovely weather for her visit and has enjoyed it, and the enjoyment has been mutual, and tonight she left for home in the auto with Rev. & Mrs. Sahlstrom. The latter has a class in Stockton. (T.S.R. 46. 2 P.M. 72. S.S. 67.)

Mar. 12. Sabbath. Rev. Nesbit of the Colony preached in A.M. for Rev. Sahlstrom who with Mrs. S. has gone to San Francisco to the announcement of Jeanette's engagement to be married. This evening they had the C. E. meeting only and Hannah led with a missionary talk and radiopticon pictures. She is working altogether too hard. (T.S.R. 53. 2 P.M. 73. S.S. 69.)

Mar. 13. Mon. Henry Brakeman was brought to Lockeford Hotel to be cared for and treated, as he is critically ill. He came yesterday and died last night and was immediately taken to undertaking parlors in Stockton. He was 55 years old - has just his sisters Olive (Mrs. Watkins of Davis) and Mary Ramsdell of Mendocino Co. and one daughter - Mrs. Bertha Thornton - to survive him. We learn that Mr. Wheatley is to succeed him as caretaker of Harmony Grove Cemetery, and we think his grave will be the first to be dug by the new caretaker. For a year or more he has been an invalid, and Will Moore lived with him until a week or two ago. Received letters from Eunice and Theresa and wrote to Portland. Theresa writes that they are expecting Robert Cooke to come to French Camp to live with them a while, hoping he may be benefited by the change of climate, as well as change of occupation. (T.S.R. 53. 2 P.M. 67. S.S. 64.)

Mar. 15. Wed. Received letters from Ida and Willie and wrote to Theresa. Henry Brakeman was buried at Brick Church. Only his sister, Olive Davis Watkins, was present of his kindred. We understand they were not able to locate his sister Mary Ramsdell. Mrs. Barbour is still critically ill - with continuous fever. She has a trained nurse and consultation of physicians. Hannah went to carry some plants to the Japanese and found they have a baby girl, and the father said he thought she was about a month old. We do not visit the mother because she speaks no English and we cannot converse with her. Hannah asked to see the baby and the mother trundled it out in a baby bugg - it is sweet and pretty. (T.S.R. 50. 2 P.M. 75. S.S. 67.)

Mar. 19. Sabbath. Again we had rain morning and evening and the Church services as usual. Edna Locke is twenty two yrs old. Theresa and babies came in their auto with Robert Cooke as their Chauffeur. He arrived at French Camp on Fri. and seems hopeful that the change in climate will be beneficial to him, as well as the change in work. Alma and Myrle also came in the P.M. (T.S.R. 55. 2 P.M. 66. S.S. 63.)

Mar. 20. Mon. Very heavy showers fell today and the river is now rising rapidly. Our first roses are blooming and freesias are in lovely bloom - also the pear orchard and pussy willows. Mrs. Kerr called. Have written to Eureka and received newspaper from James Reed of Abington