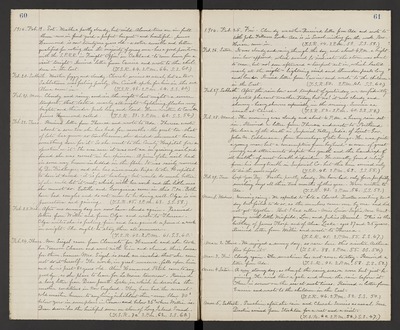 1916. Feb. 19. Sat. Weather partly cloudy, but mild. Almond trees are in full bloom - ours in front yard a perfect bouquet - and beautiful. James Hammond is now twentyone years old - a voter sensible and better qualified for voting than the majority of young men - has a good position with the S.P.R.R. in Freight Office in Oakland to come home for a visit tonight. Received letter from Eunice and wrote to the children in the East. (T.S.R. 44. 2 P.M. 66. S.S. 60.)

Feb. 22. Tues. Received letter from Theresa and wrote to Ada. Theresa wrote about a sore toe she has had for months - the great toe - that of late has grown so troublesome, she decided she must have something done for it. So she went to the County Hospital for an operation on it. She was sure it was not an in-growing nail, and found she was correct in her opinion. A piece of the nail had in some way become imbedded in the flesh. It was easily removed by Dr. Fridberger, and she has since made trips to the Hospital to have it dressed - it is fast healing - but would do much better if she could let it rest, which, with her work and the little ones she cannot do. Estelle and Georgiana came in this P.M. Both have bad coughs and do not seem to be doing well. Olga is in Jamestown and gaining. (T.S.R. 45. 2 P.M. 63. S.S. 58.)

Feb. 23. Wed. After one sunny day we now have clouds again. Received letters from Willie and from Olga and wrote to Theresa. Olga writes she is feeling fine and has gained a pound a week in weight. She ought to stay there all summer. (T.S.R. 42. 2 P.M. 61. S.S. 60.)

Feb. 24. Thurs. Mr. Siegel came from Clements for Hannah and she took her Vacuum Cleaner and went with him and cleaned their house for them, because Mrs. Siegel is such an invalid that she can not do it herself. The work, in great measure, falls upon him and he is past 80 years old. Alice Hammond Petch came to say goodbye, as she plans to leave for La Moine tomorrow. Received a long letter from Dean Jewett Locke, in which he describes the weather conditions in New England. They have had the severest cold weather know to any living inhabitant there even blow 30- below zero in some places in Conn. and below 25- where Willie is. Dean describes the beautiful scene on shore of Long Island Sound. (T.S.R. 30. 2 P.M. 62. S.S. 60.)

Feb. 26. Satur. It was cloudy and rainy through the day, and about 4 P.M. a bright rainbow appeared, which seemed to indicate the storm was about to cease, but no! soon afterward a tempest set in, which lasted nearly all the night - lightning vivid and thunder peals long and loud. Received letter from Eunice and wrote to the children in the East. (T.S.R. 50. 2 P.M. 61. S.S. 60.)

Feb. 27. Sabbath. After the rainbow and tempest of yesterday we confidently expected pleasant weather today, but no! it was cloudy and showery - heavy showers especially in the evening. service as usual at Church. (T.S.R. 52. 2 P.M. 60. S.S. 58.)

Feb. 28. Mond. The morning was cloudy and about 4 P.M. a heavy rain set in. Received a letter from Theresa and wrote to Portland. We learn of the death in Imperial Valley, Indio, of Lieut. Gov. John M. Eshlemann, from hemorhage of the lungs. He was quite a young man, but a consumptive from boyhood - a man of great energy and attainments despite his youth and the handicap of ill health - of most lovable disposition. He usually found relief from his lung trouble in Imperial Co. but this time arrived only to die the same night. (T.S.R. 48. 2 P.M. 63. S.S. 55.)

Mar. 1. Wednes. Morning rainy. we expected to hold a Church Trustee meeting today but failed to do so, as the members came one by one and did not get together. But I had callers - Miss Louise Inglis, Mrs. Montgomery with little Winfield, Lou, and Julius Bruml. This is the birthday of James Thorp and Alma Locke - ages 37 and 25 years. Received letter from Willie and wrote to Theresa. (T.S.R. 45. 2 P.M. 55. S.S. 47.)

Mar. 4. Satur. A very stormy day, as though the rainy season were but just beginning. The wind blew a gale and drove the rain before it. There is sorrow on the sea at such times. Received a letter from Eunice and wrote to the children in the East. (T.S.R. 46. 2 P.M. 52. S.S. 50.)