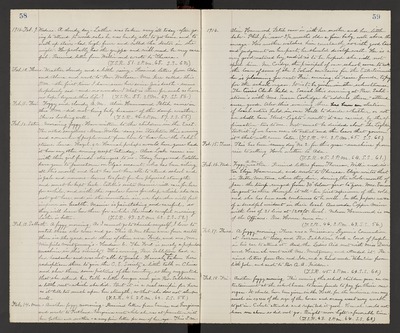 1916. Feb. 9. Wednes. A cloudy day - Luther was taken very ill today - after going to attend to wood sales he was hardy able to get home and to walk up stairs - had high fever and called the Doctor in the night. He probably has the grippe and will need be very careful. Received letter from Willie and wrote to Theresa. (T.S.R. 51. 2 P.M. 65. S.S. 62.)

Feb. 12. Satur. Morning foggy. Have written to the children in the East. The noted songstress - Mme- Melba - sang in Stockton this evening and a number of people went from here to hear her - the Sahlstroms, Laura, Hazel, &.c. Hannah perhaps would have gone had it been any other evening except Saturday. Alma Locke came in with three girl friends - strangers to us. Today George and Estelle have gone to Jamestown on Olga's account who has been ailing all this month and last has not been able to attend school and is pale and nervous - learns too fast for her physical strength and must be kept back. Estelle's sister Mamie will care for her for awhile, and with the regular hours for sleep which she cannot get here, and in the mountain air, we hope she will fast improve in health. Mamie is painstaking and careful, so they will leave her there for awhile. she needs careful nursing. Luther is better. (T.S.R. 43. 2 P.M. 62. S.S. 58.)

Feb. 13. Sabbath. A foggy morning. As I cannot go to church myself, I love to watch those who come and go. This A.M. there were four autos there in the yard, and three of them were Fords, and one, Mr. Winfield Montgomery's - Hudson 6. The Ford is surely a popular machine in this vicinity. This evening, Rev. Sahlstrom had a bad headache and was not able to preach. Hannah had taken her radiopticon there to give the C.E. Society a little talk on China and show them some pictures of the country, so they suggested that she extend her talk a little longer and give Rev. Sahlstrom a little rest - which she did. But it is a real sacrifice for her as it tells too much upon her strength, so that she does not sleep well. (T.S.R. 45. 2 P.M. 62. S.S. 58.)

Feb. 14. Mon. Another foggy morning. Received letters from Eunice and Georgiana and wrote to Portland. Georgiana wrote while she was at Jamestown with her father and mother - a very fine letter for one of her age. This P.M.

1916. Alice Hammond Petch came in with her mother and her little babe- "Phil. Jr." now 3 1/2 months old - a fine baby, well above the average. His mother watches him constantly, so with good tact and judgment on her part, he should develop well. He is a very good natured boy, and it is to be hoped she will not spoil him. Mr. Cordozo, the principal of our school, came to ask the loan of some of the S. School curtains for the Entertainment he is planning for next Fri. evening, to raise funds to pay for the school organ. It is to be given in the schoolhouse. The Civics Club held a Social this evening at Rev. Sahlstrom's with Mrs. Susan Coolidge to address them - attendance good. Also this evening there has been an election of local voters held in our Hall to decide whether or not we shall have "Street Lights" - result, it was carried by the affirmation two to one. Next must be decided about "the Lighting District", if we have one - its extend and the laws that govern it that will come later. (T.S.R. 46. 2 P.M. 65. S.S. 60.)

Feb. 16. Wed. Foggy A.M. weather. Received letters from Theresa, Willie and sister Eliza Hammond, and wrote to Theresa. Eliza writes that in Butte, Montana, where they live, during the whole month of Jan. the temp. ranged from 30- below zero to zero. Mrs. Emma Sargent is there through it all - her first experience of the cold, and she has been and continues to be well. In the papers were of a dreadful accident in their local Anaconda Copper Mine with loss of 21 lives at 1200ft. level. Nelson Hammond is one of the Officers. Bro. Horace came in. (T.S.R. 46. 2 P.M. 63. S.S. 56.)

Feb. 17. Thurs. A foggy morning. There was a Missionary Laymere's Convention at Sacramento today and Rev. Sahlstrom took a load of people in his car to attend it. And the Ladies Aid met with Miss Davis and Hannah went with Mrs. Montgomery and attended it. Received letters from Ada and Ida, and a hand-made Valentine from little John, and wrote to Rev. A.A. Kidder. (T.S.R. 45. 2 P.M. 64. S.S. 60.)

Feb. 18. Fri. another foggy morning. This evening the school children gave an entertainment at the school house to raise funds to pay for their new organ. It should have been given in the Hall, for the audience was very much in excess of the size of the house and many went away unable to get in. Celeste attended and reported it good. Hannah would not leave me alone so did not go. Bright moon-light - a favorable time. (T.S.R. 43. 2 P.M. 64. S.S. 60.)