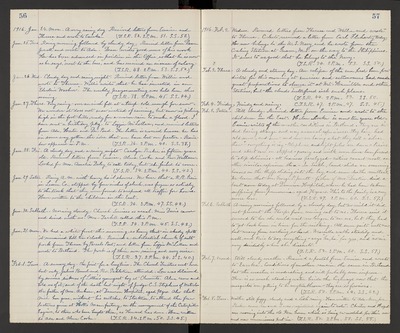 Jan. 25. Tues. Rainy morning followed by cloudy day. Received letter from Dean Jewett and wrote to Ada. Dean writes good news of his work. He has been advanced in position in the Office so that he is now as he says, "next to the boss", and has received an increase of salary. (T.S.R. 48. 2 P.M. 53. S.S. 50.)

Jan. 27. Thurs. Very rainy - over an inch fell at a temp. cold enough for snow. We wonder it does not snow instead of raining, but snow is piling high in the foot hills, ready for a warm rain to make a flood. I have sent a birthday pkg. to Lizzie McLellan, and received letters from Ada, Hester and Dr. Pond. The latter is worried because he has in some way gotten the idea that we have lost our pastor. Rainbow appeared in P.M. (T.S.R. 36. 2 P.M. 40. S.S. 38.)

Jan. 31. Mon. We had a white frost this morning, so heavy that in shady spots it remained till ten o'clock. Received a substantial chunk of salt pork from Theresa by Parcels Post, and letter from Lizzie McLellan and wrote to Portland. The pork is of their own raising and very nice. (T.S.R. 27. 2 P.M. 44. S.S. 40.)

Feb. 1. Tues. A sunny day - the first for a longtime. The Church Trustees met here but only Julius Bruml and Rev. Sahlstrom attended. Lou was detained by serious sickness of Lottie's youngest boy at Clements, Alma came and told us of it, and of the death night of Judge C.S. Stephens of Waterloo the father of Mrs. Ambrose, at Dameron Hospital, aged 90 yrs. Also that Nick has gone, without his crutches, to Stockton, to attend the free lectures given at Hott-s Mann factory, on the management of the Caterpillar Engines, to those who have bought then, as Howard has done. Have written to Ada and Alma Cooke. (T.S.R. 34. 2 P.M. 50. S.S. 45.)

1916. Feb. 2. Wednes. Received letters from Theresa and Nellie and wrote to Theresa. Celeste received a letter from Earl Fleharty today. He now belongs to the U.S. Navy and he wrote from the Coaling Station at Guam, M. I. on the way to the Philippines. It seems to us good that he belongs to the Navy. (T.S.R. 34. 2 P.M. 53. S.S. 50.)

Feb. 3. Thurs. A cloudy and stormy day. An eclipse of the sun had been predicted for this morning at sunrise and astronomers had made great preparations to observe it at Mt. Hamilton and other Stations, but the clouds interfered with such plans. (T.S.R. 44. 2 P.M. 53. S.S. 50.)

Feb. 5. Satur. Still cloudy. Received letter from Eunice and wrote to the children in the East. Helen Locke is now ten years old. Eunice writes of the weather conditions in Portland. They are indeed having strange and very unusual experiences. They have had cold severe, and snow and now are having what they call a "silver thaw" - everything is icy - telephone and light poles are down - trains and street cars are stopped - grocery milk men have been forced to stop deliveries - all business paralyzed - natives cannot recall another similar experience then. In Seattle, land-slides are occurring houses on the bluffs sliding into the bay, and some deaths resultant. We learn that Mr. George P. Jewett - father of Mrs. Dustin, died about noon today at Dameron Hospital, where he had been taken suffering from pneumonia, aged 76 years. This to the family is a very severe loss. (T.S.R. 47. 2 P.M. 60. S.S. 57.)

Feb. 6. Sabbath. a rainy morning followed by a cloudy day, but so mild it did not prevent the Thorps from coming out to us. Theresa said it seemed to her she could wait no longer to see us, but they had to get back home in time for the milking. All seem quite well now but weary from working so hard. Marcella walks steadily and well, and tries to say everything - says "ha,ha", for yes, and "no sir" very decidedly when she dissents. (T.S.R. 52. 2 P.M. 60. S.S. 57.)

Feb. 7. Mond. Still cloudy weather. Received a postal from Eunice and wrote to Eureka. Conditions of weather remain the same in Portland but the weather is moderating and will probably soon improve. There is so much standing water beside the highways now that the mosquitos are getting to be very troublesome - they are so ferocious. (T.S.R. 50. 2 P.M. 64. S.S. 62.)

Feb. 8. Tues. Weather still foggy, cloudy and a little rainy. Have written to Ada. Mr. Joe Parker came in and I was registered again to vote. Chester and Hazel are moving into the old Kerr house which is being re-modeled for their use and new convenience put in. (T.S.R. 50. 2 P.M. 58. S.S. 55.)