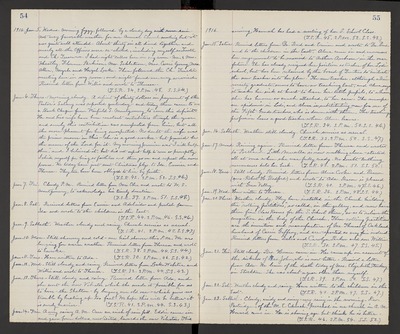 1916. Jan. 5. Wednes. Morning foggy, followed by a cloudy day with some rain. Not very favorable weather for our Annual Church meeting but it was quite well attended. About thirty in all dined together and nearly all the Officers were re-elected, including myself as Trustee and Ch. Treasurer. I had eight callers here in my room - Mr. & Mrs. Wheatley, Florence Parkison, Mrs. Sahlstrom, Mrs. Carrie Young, Mrs. Allen, Myrle and Hazel Locke. Then followed the Ch. Trustee meeting here in my room, and night found me very wearied. Received letter from Willie and wrote to Theresa. (T.S.R. 34. 2 P.M. 48. S.S. 44.)

Jan. 6. Thurs. Morning cloudy. A deficit of thirty dollars in payment of the Pastor's Salary was reported yesterday - and today there came to me a Bank Cheque from Winfield S. Montgomery to cover this deficit. He and his wife have been constant contributors through the year and surely this contribution was unexpected from him, but all the more pleasant for being unexpected. No doubt the wife was the prime mover in this - she is a good worker - but praised be the name of the Lord for it. My morning promise was - "I will help thee-, and I believed it, but did not expect help to come so promptly. I chide myself for being so faithless and then go on and repeat the same process. We today have just sent Christmas pkgs. to Ida, Eunice and Theresa. They, too, have been obliged to live by faith. (T.S.R. 42. 2 P.M. 52. S.S. 46.)

Jan. 15. Satur. Received letters from Dr. Pond and Eunice wrote to Dr. Pond and to the children in the East. Alma came in and announces her engagement to be married to Arthur Ambrose in the near future. She has already resigned her position as teacher of her Lodi school, but has been retained by the board of Trustees to initiate the new teacher into her place. The new teacher, although a University graduate, seems to have no teaching tact, and Alma says it makes her sick at heart to leave her little pupils, to whom she has became so much attached, to her care. The mumps are epidemic in Lodi, and Alma is Substituting now for one of the Fifth Grade teachers, who is down with them. The teaching profession loses a good teacher when Alma leaves. (T.S.R. 34. 2 P.M. 50. S.S. 46.)

Jan. 17. Mond. Raining again. Received letter from Theresa and wrote to Portland. Little Marcella is now walking alone - started all at once when she was fully ready. No doubt teething nervousness held her back. (T.S.R. 43. 2 P.M. 51. S.S. 50.)

Jan. 20. Thurs. Weather cloudy. They have installed in the Church building the "rolling partitions", so called, in the gallery, and now have three fine Class Rooms for the S. School there, so as to relieve the congestion in the body of the Church. These rolling partitions are the invention and manufacture of Mr. Thomas of Oakland husband of Carrie Geffroy, and are reported as very fine indeed. Received letters from Delia and Carolyn Parker and son Willie. (T.S.R. 30. 2 P.M. 47. S.S. 45.)