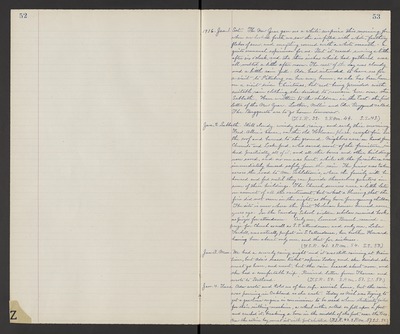 1916. Jan. 1. Sat. The New Year gave us a white surprise this morning, for when we looked forth, we saw the air filled with white, feathery flakes of snow, and everything covered with a white mantle, a quite unusual experience for us. But it ceased snowing a little after six o'clock, and the three inches which had gathered was all melted a little after noon. The rest of the day was cloudy and a little rain fell. Ada had intended to leave us for a visit to Pittsburg on her way home, as she has been here on a visit since Christmas, but not being provided with suitable rain clothing, she decided to remain here over the Sabbath. Have written to the children in the East - the first letter of the New Year. Luther, Nellie and Edw. Bergquest called. The Bergquest are to go home tomorrow. (T.S.R. 32. 2 P.M. 44. S.S. 43.)

Jan. 2. Sabbath. Still cloudy, windy and rainy, and early this morning Fred. Allen's house, on the old Holman place, caught fire in the roof and burned to the ground. Neighbors were on hand from Clements and Lockeford, who saved most of the furniture, indeed practically all of it, and all the barns and other buildings were saved, and no one was hurt, while all the furniture was immediately housed safely from the rain. The piano was taken across the road to Mr. Sahlstrom's, where the family will be housed and fed until they can provide themselves quarters in some of their buildings. The Church services were a little late on account of all the excitement, but what a blessing that the fire did not occur in the night, as they have four young children. The site is near where the first Holman house burned some years ago. In the Sunday School sixteen scholars received books as prizes for attendance. Only one, Leonard Bruml, received a prize for Church as well as S.S. attendance, and only one, Lela Tarbell, was actually perfect in S.S attendance, her brother Howard having been absent only once, and that for sickness. (T.S.R. 41. 2 P.M. 54. S.S. 53.)

Jan. 3. Mon. We had a severely rainy night and it was still raining at train time, but Ada's season ticket expires today and she decided she must go home, and went, but the rain ceased about noon, and she had a comfortable trip. Received letter from Theresa and wrote to Portland. (T.S.R. 50. 2 P.M. 51. S.S. 50.)

Jan. 4. Tues. Ada wrote and told us of her safe arrival home, but the rain was pouring in Oakland as she wrote. Today as Niel was trying to get a gasoline engine in commission to be used when electricity failed for their milking machine, a wheel either rolled or fell upon a foot and crushed it, breaking a bone in the middle of the foot, near the toes. Now the active boy must sit with foot elevated. (T.S.R. 42. 2 P.M. 57. S.S. 52.)