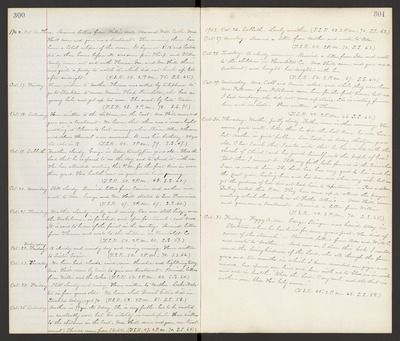 1902. Oct. 16. Thurs. Received letters from Willie and Ada and Will Cooke. Mrs. Hill came and gave me a treatment. This evening there has been a total eclipse of the moon. It began at 8:15 and lasted two or three hours before all was over. Jim Thorp and Stella Condy came out and with Theresa, Geo. and Mr. Hill there was quite a party to watch it, which did not break up till after midnight. (T.S.R. 44. 2 P.M. 75. S.S. 65.)

Oct. 29. Wednesday. Mrs. Cobb and Annie called, and while they were here Mrs. Patterson from Petaluma came here for the first time, but as I had company, she did not came upstairs. She is visiting friends here and in Lodi. Have written to Theresa. (T.S.R. 42. 2 P.M. 66. S.S. 64.)

Oct. 30. Thursday. Weather partly cloudy. Father came in this morning. He seems quite well - better than he did the last time he was here - but Mother is quite feeble. Son Eddie is today thirty one years old. O how I wish that I could write that he has united with the church of Christ, and has joined himself unto the people of God! But this I cannot do. Still my faith looks forward to the time when I can so record him. The Lord has been very good to him and his the past year, healing him and his dear ones when very sick, but as yet "the goodness of God does not lead him to repentance." Rev. and Mrs. DeKay called this P.M. They have come up to attend the prayermeeting which this week is at Father Allen's. Mrs. Hill came and gave me a treatment. Received a letter from Willie. (T.S.R. 42. 2 P.M. 70. S.S. 65.)

Oct. 31. Friday. Foggy A.M. George Ringer was buried today in Stockton, where he has lived for some years past. He died of cancer of the stomach - Received letters from Ada and Will C. and wrote to Mother. And now as I close this book I would record the loving kindness of the Lord, who all through the four years and ten months in which I have recorded our joys and sorrows, has spared our lives and been with us to bless us in sickness and in health. "Bless the Lord, O my soul, and all that is within me, bless His holy name." (T.S.R. 45. 2 P.M. 65. S.S. 58.)