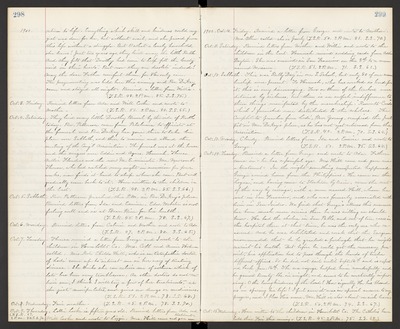 1902. return to life. Everything which skill and kindness could suggest was done for her, but without avail, and she passed from this life without a struggle. But O what a lonely household she leaves! Just two years ago, they laid away the little Ruth. And they felt that Dorothy had come to help fill the lonely void in their hearts. But now they are desolate indeed! May the dear Father comfort them, for He only can. The prayermeeting was held here this evening and Rev. DeKay came and stayed all night. Received a letter from Willie. (T.S.R. 48. 2 P.M. 85. S.S. 75.)

Oct. 4. Saturday. They laid away little Dorothy Bruml by the side of Ruth today. Rev. Patterson came from Petaluma to officiate at the funeral and Rev. Dekay has gone there to take his place over Sabbath, and then to remain and attend the meeting of the Cong'l Association. The funeral was at the house and the singers were Eddie and Agnes, Hannah, Theresa' Nellie Flanders and the new M.E. minister - Mr. Newcomb. Theresa, who had watched every night in succession for four weeks, now finds it hard to sleep when she can. But will gradually come back to it. Have written to the children in the East. (T.S.R. 48. 2 P.M. 85. S.S. 66.)

Oct. 7. Tuesday. Theresa received a letter from George and I wrote to the children in Humboldt Co. Mrs. Cobb and Annie [?] called. Mrs. Kate Childs Hill, who is an Osteopathic doctor of Lodi came up to interest me in her way of treating disease. She thinks she can relieve me of asthma which of late has been very troublesome. As other doctors do not relieve me, I think I will try a few of her treatments, as she just manipulates, and gives no drugs or medicines. (T.S.R. 51. 2 P.M. 78. S.S. 68.)

Oct. 11. Saturday. Received letters from Mother and Willie and wrote to the children in the East. Hannah received wedding cards from Addie Dayton. She was married in San Francisco on the 8th to a man named Morrison. (T.S.R. 51. 2 P.M. 71. S.S. 62.)

Oct. 12. Sabbath. this was "Rally Day" in our S. School, but only 80 of our membership were present. To Hannah, who has worked so hard for it, this is very discouraging. Two or three of the teachers were detained by sickness, but there is an awful indifference to these things manifested by the membership. "Roosevelt Cards" which I furnished were distributed to the scholars. The Campbellite preacher from Lodi., Rev. Young, occupied the pulpit in Mr. DeKay's place, as he has not yet returned from the Association. (T.S.R. 42. 2 P.M. 70. S.S. 64.)

Oct. 14. Tuesday. Received a letter from George and wrote to Ada. Father came in - he has a painful eye. Mrs. Hill came and gave me a treatment. In the night something unexpected happened. George arrived home from the Philippines. He came on the "Logan", and having come to Stockton by train, came the rest of the way by carriage, with a man named Hill, whom he met in San Francisco, and who was formerly associated with him in San Isidro. We find that George's illness this summer has been much more serious than he was willing we should know. He had the cholera in San Pablo, and out of ten cases in the hospital there at that time, he was the only one who recovered. And he was debilitated and weak that the Surgeon recommended that he be granted a furlough that he might recruit his health. But before he could get the necessary permit, his application had to pass through the hands of twelve different officers. So he did not sail until Sept. 16th and is expected back. Jan. 16th. The sea voyage helped him wonderfully and he gained twenty lbs. in weight, and seems to be constantly improving. O the loving kindness of the Lord! How signally He has blessed us in sparing his life! I feel sure it was in special answer to my prayers, and I bless His name. Mr. Hill is also absent on sick leave. (T.S.R. 50. 2 P.M. 74. S.S. 67.)