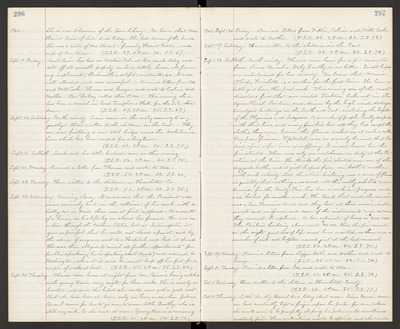 Sept. 19. Friday. Aunt Susie has had an Auction Sale at her ranch today and sold off all movable property, such as cattle, horses, all farming implements, blacksmith's outfit, windmill, &.c. It was well attended and was successful. Received letters from Ada and Will Cooke, Theresa and George and wrote to Calvin and Mother. Rev. DeKay called this P.M. This evening there has been a social in Good Templar's Hall, for the S.S. children. (T.S.R. 47. 2 P.M. 75. S.S. 67.)

Sept. 20. Saturday. North windy. Susie came in the early morning to say goodbye. Have written to the children in the East. They are now building a new steel bridge across the Mokelumne here, which has been needed for a long time. (T.S.R. 48. 2 P.M. 80. S.S. 75.)

Sept. 24. Wednesday. Morning cloudy. It seems now that the President was more seriously hurt in the collision of his coach with a trolley car in Mass. than was at first supposed. As a result of a bruise on his left leg an abscess has formed. He was on a tour through the Western States, but at Indianapolis it grew so painful that he could not stand upon it, and by the advice of surgeons, went to a Hospital, and had it opened. He was then obliged to cancel all further appointments for public speaking (he is speaking about trusts) and returned to Washington, where it is said he must keep off his feet for a couple of weeks at least. (T.S.R. 55. 2 P.M. 75. S.S. 64.)

Sept. 25. Thursday. Theresa came home at night from Mr. Brown's, having watched with young Brown every night for three weeks. She is nearly exhausted and said she hoped she could now get a good rest. But she had been at home only an hour or so, when Julius Bruml came for her to go over to nurse little Dorothy, who is still very sick. So she went at once. Young Brown is recovering. (T.S.R. 45. 2 P.M. 74. S.S. 71.)

Sept. 28. Sabbath. North windy. Theresa came home for a few minutes from Laura Bruml's. Baby Dorothy is no better. Small hopes are entertained for her recovery. We learn that Mamie (Thorp) Fairchild is a mother for the first time. She has a little girl born this past week. This evening one of the most disastrous fires that ever visited Stockton broke out in the Agricultural Pavilion, and, driven by the high wind, destroyed twentysix buildings on the South and East, including the hospital of the Physicians and Surgeons. A number of people barely escaped with their lives, and many families lost all they had except the clothes they wore, because the flames rushed on at such a rate. One poor fireman, F.J. Walsh, was so severely burned that he died after a few hours of suffering. It is not know how the fire started. There was only one watchman on duty at the Pavilion at the time. He thinks the fire started near one of the dry goods booths, and it just leaped from one booth to another with such velocity that the whole building was a mass of flames so quickly that nothing was saved - all the costly exhibits were burned, for the County Fair has been a week in progress and was "booked" for another week. The Band that made the music was a San Francisco Band and they lost all their music, instruments and uniforms, and some of the instruments were so rare they cannot be replaced. A low estimate of losses is $200,000. The Pavilion building alone cost $40,000. Had the fire occurred in the night great loss of life must have resulted, as there were a number of sick and helpless rescued, just at the last moment. (T.S.R. 50. 2 P.M. 84. S.S. 75.)

Oct. 2. Thursday. Little Dorothy Bruml died today about noon. Since Mond. someone had constantly kept a finger upon her pulse, for even when she would seem to be peacefully sleeping, her pulse would sometimes suddenly fail. Then restoratives would be applied and she would