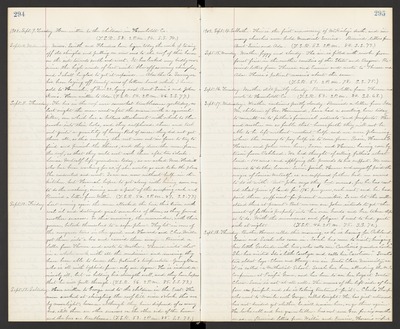 Sept. 10. Wednesday. Messrs. Smith and Flanders have begun today the work of tearing off old shingles and putting on new ones to the roof of this house on the side towards south and west. It has leaked very badly ever since the high winds of last winter blew off so many shingles, and I shall be glad to get it repaired. Also the Co. Surveyor has been laying off twenty acres of bottom land which I have sold to Hannah, of Div. 22, lying next Aunt Susie-s and John Kerr-s. Have written to Ada. (T.S.R. 54. 2 P.M. 86. S.S. 77.)

Sept. 11. Thursday. The bees in the roof were somewhat troublesome yesterday, so last night the men went after the swarm with a squirrel-killer, one which has a bellows attachment with which to blow smoke into their holes, and they sulphured them and took out quite a quantity of honey. But of course they did not get them all, so this morning the rest were out in force to try to find and finish the thieves, and they drove the men from the roof, so that they could not work there after ten o-clock. Louisa Metcalf left grandma today, so we asked Mrs. Hodnitt who has been working for us, if she would go and take the place. She consented and went. So we are now without help in the kitchen, but Hannah hopes to get along with hiring some one to do the washing, ironing and a part of the sweeping each week. Received a letter from Willie. (T.S.R. 56. 2 P.M. 87. S.S. 77.)

Sept. 12. Friday. Last evening again the men attached the bees, this time with coal oil and destroyed great numbers of them, as they found another swarm. So this morning, the remainder, with their queen, betook themselves to a safer place. They lit in one of the evergreen trees in the yard and Howard and Chas. Miller got them into a box and carried them away. Received a letter from Theresa and wrote to Mother. Theresa writes that in a whole week, with all the medicine and nursing, they have been able to lower the patient-s temperature - Young Brown who is ill with typhoid fever - only one degree. He is indeed seriously ill, but is holding his strength well, and they have hopes that he will pull through. (T.S.R. 56. 2 P.M. 85. S.S. 73.)

Sept. 13. Saturday. Have written to George and to the children in the East. The men worked at shingling the roof till nine o-clock this eve by moonlight, because although they have disposed of so many bees, still there are other swarms on the other side of the house and the bees are troublesome. (T.S.R. 53. 2 P.M 85. S.S. 73.)

Sept. 15. Monday. Weather foggy and cloudy. The air is filled with smoke from forest fires in the northern counties of the State and Oregon. Received letters from Theresa and Eunice and wrote to Theresa and Ada. Theresa's patient remains about the same. (T.S.R. 51. 2 P.M. 78. S.S. 75.)

Sept. 17. Wednesday. Weather continues partly cloudy. Received a letter from Ida. We, children of Geo. Hammond, have had a meeting here today to consult as to father's financial interests and prospects. He and mother are so feeble that henceforth they will not be able to be left without constant help, and we were planning where the money to pay help is to come from. Susie, Hannah G. Horace and John were here. Susie and Horace having came by train from Oakland. We had thought of selling father's wheat land - 100 acres - and applying the proceeds to his support. We were moved to do this, because Susie, Josiah, Horace and myself paid the wages of Louisa Metcalf, as we supposed father had no means to do it with. But John says they had means, for he has rented that piece of land for $175. per year, cash rent, and he had paid them sufficient for present necessities. So we let the matter stand thus at present. But we can see John intends to get the most of father's property into his own hands and has taken steps so to do. With the nervousness and fatigue I went to bed quite sick at night. (T.S.R. 46. 2 P.M. 75. S.S. 70.)

Sept. 18. Thursday. Brother Horace called this morning, as he is leaving for Oakland. Susie and Sarah also came in. Sarah has come to visit, bringing her little Gertrude with her, who calls me "Carolion's grandma Locke." She has visited Ida's little Carolyn and calls her "Carolion." Sarah's two eldest boys - Elmer and Harry - are in Santa Clara University, as it is called - a Methodist School. Sarah has been attending the M.E. Conference at Pacific Grove, and has been to see her boys at Santa Clara. Susie is not all well. The nerves of the left side of her face are painful, and she is taking treatment for it. Charles Thorp who went to Manila with George, called tonight. He has just returned has not decided yet whether he will remain here, or go there again. He looks well and has grown taller - has not seen Geo. for six months or so. Received letters from Willie and Eunice, Horace's wife.