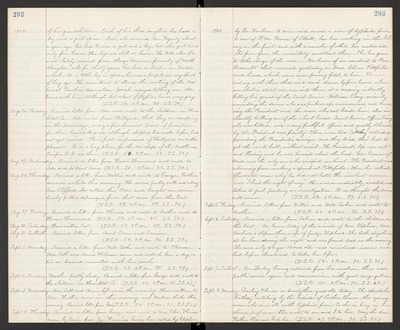 1902. of his grandchildren. Each of his three daughters has had a boy and a girl apiece. Kate, who married Rev. Fogarty about a year ago, has had twins, a girl and a boy, but the girl lived only four hours. His boys are still at home. He tells also of a visit lately received from Alonzo Meserve, formerly of North Abington, who for thirty years has been a teacher in Boston schools. As a little boy in aprons, he was a pupil in my school of long ago. He came West to attend the meeting of the National Teachers' Association. Josiah enjoyed talking over old times with him. Although but about fiftyfive, he is very grey. (T.S.R. 54. 2 P.M. 80. S.S. 70.)

Aug. 26. Tuesday. Received letter from Ada and wrote to the children in Humboldt Co. Ada writes from Hillyard, that they are camping in the parsonage, using a few borrowed pieces of furniture, for their household goods, although shipped two weeks before, had not yet arrived. Their first impressions of Hillyard are rather pleasant. It is a busy place, for the car shops of the Northern Pacific R.R. are there. (T.S.R. 50. 2 P.M. 83. S.S. 73.)

Aug. 28. Thursday. Received a letter from Willie and wrote to George. Father came in a while this morning. He seems pretty well and strong. Mrs. Clifford also called this P.M. and brought me some lovely potted asparagus ferns, that came from the East. (T.S.R. 49. 2 P.M. 89. S.S. 78.)

Sept. 4. Thursday. Received a letter from George and wrote to Mrs. Ober. Theresa came by train from San Francisco having been called by telephone

1902. by Dr. Barbour to come and nurse a case of typhoid fever. A son of F.M. Brown, of Elliott, has been working in the Colony iS the fruit, and, with a number of others, has contracted the fever from the unsanitary conditions there. She has gone to take charge of the case. We learn of an accident to Pres. Roosevelt that occurred yesterday in Mass. between Pittsfiled and Lenox, which came near proving fatal to him. He was riding with three others in a coach drawn by four horses, when an electric street car ran into them at a crossing, instantly killing his guard of the Secret Service - William Craig - seriously wounding the driver who was picked up unconscious, and bruising the President and the man who sat beside him, also instantly killing one of the wheel horses. Secret Service Officer Craig who was killed, was a very faithful officer and greatly beloved by the President and family. There were two Cavalry outriders preceding the President's carriage and they tried their best to get the car to halt, without avail. The President's lip was cut and bleeding and he was bruised about the head. Gov. Crane of Mass. was the only one who escaped unhurt. The President was returning from making a speech at Pittsfield. When he asked the motor man why he did not halt, the insolent answer was "I had the right of way." He was immediately arrested and taken to jail, pending an investigation. It is thought the driver will recover. (T.S.R. 58. 2 P.M. 97. S.S. 75.)

Sept. 6. Saturday. Received a letter from Calvin and wrote to the children in the East. We learn today of the suicide of Mrs. Stephens, Mrs. Ambrose's stepmother, wife of Judge Stephens. She took strychnin at her home during the night and was found dead in the morning. She was only 44 yrs. 10 mos. old was considered insane, and had before threatened to take her life. (T.S.R. 58. 2 P.M. 90. S.S. 81.)

Sept. 8. Monday. Darling Theresa is twentythree years old today. She spends her birthday watching by the bedside of Luther Brown, the young man who is so ill with typhoid fever. So she is busy in her chosen profession. She wrote to me and I to her. May the dear Father bless and keep her. (T.S.R. 67. 2 P.M. 94. S.S. 81.)