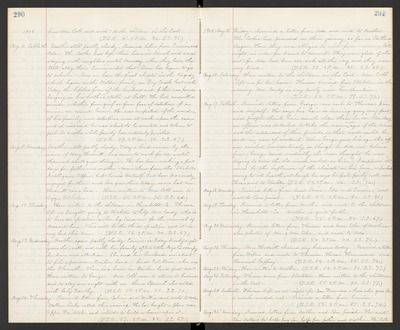 Aug. 10. Sabbath. Weather still partly cloudy. Received letters from Eunice and Ada. The Cookes had left their home in Sunol and were staying with neighbors until Monday, when they leave the State altogether. Eunice writes that Dean has begun to go to school. Now we have the final chapter in the tragedy which began in the Wilder family on Dry Creek last week. Today the lifeless form of the husband and father was found hanging in his brother's stable at Galt. He had committed suicide, whether from grief or from fear of detection of a crime, we cannot know. He was suspected of the murder of his family, and detectives were at work upon the case and at was said he was about to be arrested and taken to jail. So another whole family has suddenly perished. (T.S.R. 59. 2 P.M. 78. S.S. 67.)

Aug. 11. Monday. Weather still partly cloudy. Today a hired woman by the name of Mary Hodnitt, has come to work for us until Hannah shall grow stronger. She has been working a few days for father and mother - came there from the Stockton Intelligence Office, but Louisa Metcalf had been previously engaged for there and has gone there today, so we had Mrs. Hodnitt come here. Have written to Mrs. Cobb and to Lizzie McLellan. (T.S.R. 55. 2 P.M. 76. S.S. 66.)

Aug. 12. Tuesday. Have written to the children in Humboldt Co. Theresa left us tonight, going to Stockton to help Mrs. Condy, who is to have an operation on her leg tomorrow for the removal of diseased bone. This will be the third operation and it is very bad this time. (T.S.R. 56. 2 P.M. 80. S.S. 67.)

Aug. 13. Wednesday. Weather again partly cloudy. Eunice is today twentyeight years old, well, and with her family of two little boys to occupy her time and attention. She and her husband are about to file upon some timber land - he on Eel River - she on the Klamath. There is a boom in timber land just now. Have written to George. Mrs. Cobb came to attend to business and to stay over night with us. Laura Bruml also called with baby Dorothy. (T.S.R. 56. 2 P.M. 80. S.S. 70.)

1902. Aug. 15. Friday. Received a letter from Ada and wrote to Mother. The Cookes had proceeded on their journey as far as Portland Oregon. Here they were obliged to wait from morning till night, in order for trains to connect. They were glad of the rest, for Ada had been car-sick all the way and they were very tired. (T.S.R. 52. 2 P.M. 81. S.S. 68.)

Aug. 17. Sabbath. Received letters from George - one each to Theresa, Jim and myself. He says his hair is turning grey very fast, and people think him much older than he is. One day an officer was detailed to take the names and ages of the men and the addresses of their friends, so that word could be sent in case of accident. When George gave his age the officer smiled incredulously as though he did not believe him, George said evidently the man thought he was "trying to come the old maid racket on him." I suppose it must be the influence of the climate on his hair, or perhaps owing to ill health, although he says he feels fairly well now. Theresa went to Stockton. (T.S.R. 53. 2 P.M. 86. S.S. 76.)

Aug. 25. Monday. Received letters from Mother and Bro. Josiah. He sent ten dollars to help pay for help for father and mother. He tells