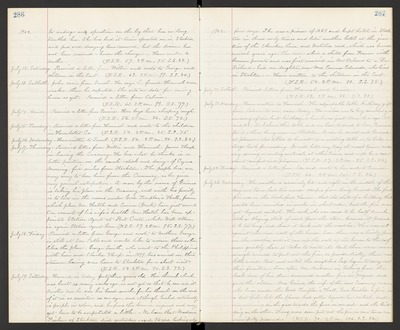 1902. to undergo an operation on the leg that has so long troubled her. She has had it twice operated on in Stockton and pus and decaying bone removed, but the disease has not been removed - hence the change. Have written to Mother. (T.S.R. 57. 2 P.M. 95. S.S. 83.)

July 17. Thursday. Received letters from Willie and Hannah. James Thorp is leaving the Creamery. He has what he thinks is a better position on the ranch - stock and dairy - of Cyrus Moreing, five miles from Stockton. The people here are very sorry to lose him from the Creamery, as he gives very general satisfaction. A man by the name of Grimes is taking his place in the Creamery, and with his family is to live in the rooms under Good Templar's Hall, from which place Mr. Hatch and Emma (Grubs) have just moved On account of his wife's health Mr. Hatch has been appointed Station Agent at Port Costa, while Will Allen is again Station Agent here. (T.S.R. 59. 2 P.M. 95. S.S. 77.)

July 18. Friday. Received a letter from George and wrote to Mother. George is still at San Pablo and would like to remain there as he likes the place. George Smith, who went to the Philippines with him and Charles Thorp in 1899, has arrived on this steamer, having come home to Stockton for a short visit. (T.S.R. 58. 2 P.M. 90. S.S. 73.)

July 19. Saturday. Howard is todayforty three years old. His thumb, which was hurt so many weeks ago is not yet so that he can use it. Neither can he use his hand much, for his thumb on the end of it is as sensitive as an eye, and although healed outwardly is purple in color, and his fears the bone is injured and may yet have to be amputated a little. We learn that Madame Fisher of Stockton died yesterday, aged 96 yrs lacking only

1902. four days. She was a pioneer of 1851 and kept hotel in Stockton in those early times and later another hotel at the junction of the Cherokee Lane and Waterloo road, which was burned several years ago. She came when a child from France with German parents and was first married in New Orleans to a Dr. Richard - had one daughter, now Mrs. Emma Edwards, who lives in Stockton. Have written to the children in the East. (T.S.R. 54. 2 P.M. 90. S.S. 75.)

July 21. Monday. Have written to Hannah. The adjustable table, birthday gift from Calvin to me, came today. He wished me to buy something in memory of our last birthday, when I was just twice his age - 66 and 33. So I chose this table and we had to send to San Francisco for it, there being none in Stockton. It can be raised and lowered at pleasure, also tilted to be used as a writing table or to hold a large book for reading. It will hold my tray at meal-times, and my sewing or writing materials at other times, and will be a constant comfort and pleasure. (T.S.R. 57. 2 P.M. 95. S.S. 80.)

July 23. Wednesday. The weather is excessively hot, and right in the middle of the day, our town had to narrow escapes from being burned. The first few was in the Lockeford House - that old shell of a building, that would have vanished in smoke in short order, had the fire once got beyond control. The cook, who was said to be half drunk, took a blazing stick of wood from the stove, because it proved to be too long, and threw it back into the wood box. This was set against the near wall of the house. Soon there was a lively fire in the wood box, and it ran up the wall of the house to the roof more quickly than it takes to write it. But there were men enough around to put out the fire, as providentially, there was little wind. But not until the neighbors had began to carry out their furniture. Soon after, Mr. Ambrose, in looking from the back door of his store, discovered another fire in progress and gave the alarm. Mrs. Grimes, the wife of the new Creamery man, who lives under the Good Templar's Hall, had kindled a fire in a dirt pile, but the flames had gotten beyond her control, and were running in the grass towards the fence on one side and the building on the other. Strong arms soon put out the fire, so our town was mercifully preserved. (T.S.R. 70. 2 P.M. 106. S.S. 86.)