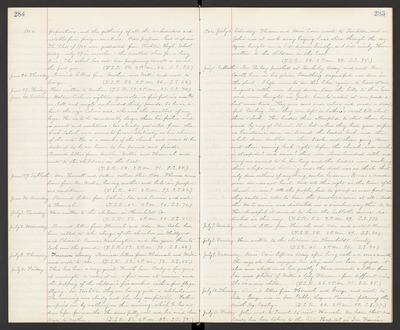 1902. preparations, and the gathering of all the ambassadors and notables from foreign countries. "Man proposes - God disposes." The Class of 1902 were graduated from Stockton High School today - only 29 in number - the smallest class for a long time. The school has not been prospering as well as usual the past year. (T.S.R. 54. 2 P.M. 86. S.S. 73.)

June 28. Saturday. Weldon Cooke is eighteen years old, is five feet, six and 3/4 in tall and weighs one hundred thirty pounds. So he is about the size Calvin was, who was the smallest of my boys. He is to be considerably larger than his father and is smart and ambitious - has already graduated from the Lick School, and seems to favor electricity as his choice of the arts. He is a member of the church and seems to be destined to be an honor to his parents and friends. Received letters from Mother, Willie and Hannah and wrote to the children in the East. (T.S.R. 58. 2 P.M. 91. S.S. 84.)

July 2. Wednesday. Received letters from Hannah and Ada. Mr. Cooke has been called to take charge of the churches in Hillyard and Pleasant Prairie, Washington, and has gone there to look over the ground. (T.S.R. 53. 2 P.M. 78. S.S. 68.)

July 4. Friday. This has been a very quite Fourth here. Only a few guns at midnight to usher it in a few more at sunrise and the popping of the children's firecrackers, with a few flags flying. In Stockton they are having quite a celebration. The morning was cloudy and the day comfortable. Father surprised me by walking in this morning, which he has not done before for months. He seems pretty well and his mind clear. Wrote to Mother. (T.S.R. 51. 2 P.M. 83. S.S. 72.)

July 6. Sabbath. Rev. DeKay preached at Berkeley today and sent Rev. Cowell here in his place. Something disgraceful was done in the street - I hope never to see the like again. A band of Mr. Sargent's cattle were being driven from the hills to their home and were brought in past here to water at our pond about noon-time. They were cows and calves and made a dreadful bowling. Then they were left in Luther's corral till about three o'clock. The herders then attempted to start them home ward by way of Church St. but when they had gone as far as Garretson's, some one turned the leaders back, and the whole drove doubled on their tracks, and those going down met those coming back right before the church, and such a stampede! and noise! there were eleven hundred cattle and everyone seemed to be bowling and the herders were cracking their whips and hollering, and the dust was so thick that only dim outlines of anything could be seen. It was a wonder some one was not hurt. And all this right in the time of the church service! All the people had to go up as near front as they could in order to hear the preacher's voice at all. And the M.E. service was disturbed in a similar way this A.M. How dreadful it seemed to have the Sabbath service disturbed in this way. (T.S.R. 53. 2 P.M. 89. S.S. 77.)

July 9. Wednesday. Miss Cain left us today after being with us over a month. She says she has enjoyed her stay and we have enjoyed it also and shall miss her greatly. Have received a letter from Ida and photos of Willie's baby Florence - four different views. She is a nice child. (T.S.R. 66. 2 P.M. 99. S.S. 85.)

July 11. Friday. John went to Sunol to visit Hannah. We learn that Mrs. Condy has been taken to the R.R. Hospital in San Francisco