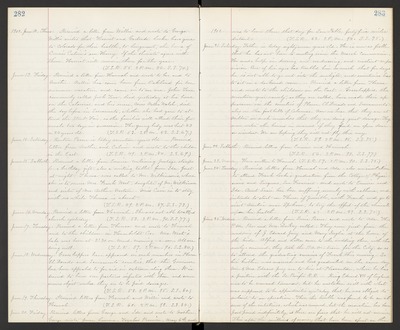 1902. June 12. Thurs. Received a letter from Willie and wrote to George. Willie writes that Harriet and Gertrude Locke have gone to Colorado for their health, to Longmont, the home of Cousin Calvin's son Harry. If the climate agrees with them, Harriet will remain there for the year. (T.S.R. 55. 2 P.M. 86. S.S. 70.)

June 13. Friday. Received a letter from Hannah and wrote to her and to Mother. Nellie has come home from Oakland for her summer vacation and came in to see me. John Tone commonly called Jack Tone, died yesterday at his home on the Calaveras, and his niece, Miss Nellie Walsh, died the day before in Sacramento, whither she had gone to attend the Street Fair, so the families will attend their funerals two days in succession. The young lady was but 23 or 24 years old. (T.S.R. 53. 2 P.M. 83. S.S. 67.)

June 15. Sabbath. Received a letter from Eunice containing postage stamps for a birthday gift, also a writing tablet from Ida. Just at night, Theresa was called to Mr. Walkinson's, where she is to nurse Mrs. Frank West, daughter of Mr. Wilkinson and sister of Mrs. Arthur Norton. Miss Cain is to stay with us while Theresa is absent. (T.S.R. 49. 2 P.M. 87. S.S. 73.)

June 18. Wednesday. Grasshoppers have appeared in such members in Places El Dorado and Sacramento counties, that the Governor has been appealed to for aid in exterminating them. It is desired to burn over pastures infested with them and some owners object unless they are to be paid damages. (T.S.R. 58. 2 P.M. 95. S.S. 80.)

June 20. Friday. Received letters from George and Ida and wrote to Mother. George wrote from Lucena, Tayabas Province, May 6th and

June 21. Saturday. Father is today eightyseven years old. He is now so feeble that he has not been to meeting since the March Communion. He needs help in dressing and undressing, and constant supervision. One of his eyes has troubled him so much that for days he is not able to go out into the sunlight, and sometimes has to sit in a darkened room. Received a letter from Theresa and wrote to the children in the East. Grasshoppers, the seventeen year variety, as they are called, have made their appearance in the counties of Places, El Dorado and Sacramento - also in the foothills of Calaveras. Now we hear that they on at Milton in such numbers that they are doing great damage. They even enter the houses in swarms if they find an open door or window. We are hoping they will not fly this way. (T.S.R. 59. 2 P.M. 95. S.S. 75.)

June 24. Tuesday. Received letters from Hannah and Ada - also are invitation to attend Frank Locke's graduation from the College of Physicians and Surgeons, San Francisco and wrote to Eunice and Ida. Aunt Susie has been suffering severely with asthma, and intends to start on Thurs. if possible, with Frank and go to visit Mertice near Spokane, to try the effect of the climate upon her health. (T.S.R. 62. 2 P.M. 89. S.S. 75.)

June 25. Wednes. Received a letter from Susie Pascoe and wrote to Ada. This P.M. Rev. and Mrs. DeKay called. They were just from the wedding of J. Edward Jory and Mary Ingles at the home of the bride. Alfred and Lilla came to the wedding then with the newly-married, they took the 11 A.M. train for the City, so as to attend the graduating exercises of Frank this evening. So his brother was married and hers graduated on the same day. Mr. & Mrs. Edward Jory are to live at Pleasanton, when he has a position with the So. Pacific R.R. King Edward VII of England was to be crowned tomorrow, but he was taken so ill with what was supposed to be appendicitis yesterday that he was obliged to submit to an operation. Then the trouble was found to be an abscess of the intestines, which was removed, but the coronation has been postponed indefinitely, as there are fears that he will not survive. This after the millions of money that have been spent on the