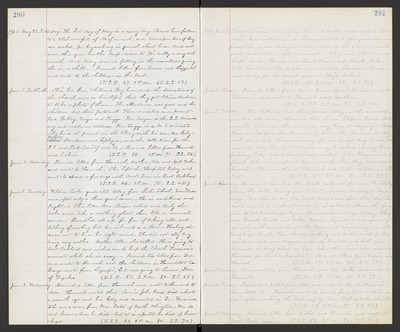 1902. May 31. Saturday. The last day of May is a rainy day. Showers have fallen to a total rainfall of .30 of an inch, and tons upon tons of hay are soaked, for hay making is general about here. And not once this year has the temp. risen to 90- really a very cool month. And today snow is falling in the mountains giving the air a chill. Received letters from Eunice and Lizzie Mc and wrote to the children in the East. (T.S.R. 47. 2 P.M. 65. S.S. 53.)

June 1. Sabbath. This has been Children's Day here, and the decorations of the church were so beautiful that they got Oliver Ambrose to take a photo of them. The attendance was good and the children did their parts well. Three ministers were present - Revs. DeKay, Singer and Triggs. Rev. Singer is the S.S. Missionary and made an address. Rev. Triggs is a M.E. minister who lives at present in the Colony with his son. One baby - Arthur Knudsen - was baptized, and the collection for the S.S. and Pub. Society was $10. Received letters from Hannah and Calvin. (T.S.R. 48. 2 P.M. 71. S.S. 56.)

June 3. Tuesday. Weldon Cooke graduates today from Lick School, San Francisco, after only a three years' course. He is ambitious and bright. This P.M. Mrs. Rixon called and tinly she looks more like a walking ghost than like a normal woman. Bundled all up for fear of taking cold and talking of nothing but her ailments and Diving Healing, she seems not to be in her right mind. She did not stay long being very restless. Mother Allen also called. She is going to East Oakland and wishes me to keep the Church Treasurer's accounts while she is away. Received two letters from Geo. and wrote to Hannah and the children in Humboldt Co. George wrote from Legaspi, but was going to Lucena, Prov. of Tayabas. (T.S.R. 51. 2 P.M. 80. S.S. 65.)

June 4. Wednesday. Received a letter from Hannah and wrote to her and to Ada. Hannah writes that Cousin John Reed died about a month ago and his body was cremated in San Francisco. The news came from Mrs. Bates of North Abington. We do not know where he died, but it is reported he died of hemorrhages. (T.S.R. 49. 2 P.M. 80. S.S. 70.)

1902. June 5. Thursday. Received letters from Ida and Willie and wrote to Hannah. Examinations in our Grammar School for graduation and promotion ended today and the whole of the class in ninth grade graduated - eight in number. They were Chester and Lottie Locke, Horace and Pearl Hammond, Edith Parker, Rolla Garretson, Ella Snyder and Emelda Sherden. All are now ready for the second year in High School. (T.S.R. 49. 2 P.M. 88. S.S. 70.)

June 7. Saturday. The Catholics had their picnic today, with a much smaller attendance than we had at our Citizen's Picnic last month, but now the men are very busy at haying. Miss Cain arrived from San Francisco by train. She has come to stay with me while Theresa is away, for she is expecting to act as nurse to Mrs. Frank West, and may be called at any time Yesterday P.M. School trustees were elected - John Hammond to finish Roland's unexpired term and Dr. Pristley to succeed himself. Have written to Hannah and to the children in the East. (T.S.R. 55. 2 P.M. 90. S.S. 77.)

June 8. Sunday. We were to have had Rev. Cowell to preach for us in Rev. DeKay place, the letter having gone to a Temperance Meeting at Murphys. But this A.M. Rev. Cowell telephoned from Lode that he could not be here this P.M. as he is called to attend the funerals of two Woodbridge boys, who were drowned yesterday. They were Harrold Perrott and Willie Morrow, boys about nine years of age, who with a number of other boys , went swimming in the Woodbridge Canal. Harrold was sinking and Willie went to his assistance and was dragged under by Harrold and both were drowned, it being about an hour before their bodies were recovered. How sad for the two families! Received letters from Eunice and Hannah. (T.S.R. 55. 2 P.M. 96. S.S. 79.)