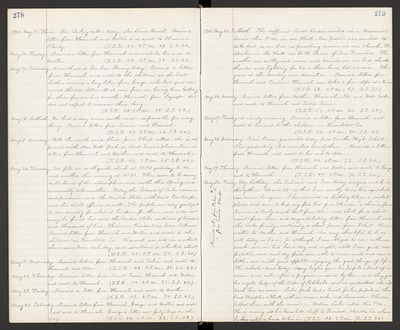 May 17. Saturday. A north wind has been blowing today. Received a letter from Hannah and wrote to the children in the East. Luther received a long letter from George, who had just received thirteen letters all at one from us, having been looking for them for over two months. He wrote from Legaspi, but did not expect to remain there long. (T.S.R. 48. 2 P.M. 68. S.S. 62.)

May 20. Tuesday. We felt an earth quake shock at 10:20 yesterday A.M. and another this morning at 10:30. There seem to be many disturbances of the atmosphere and earth this Spring, and unusually cold weather. Today the Island of Cuba assumes independence, and the United States withdraws her troops and her civil officers as well. The people are very grateful to our country for what it has done for them, and will it may be for it has cost the United States millions of treasure and thousands of lives. Their new President is Senor Palmas. Received letters from Hannah and Willie and wrote to the children in Humboldt Co. Hannah now sits in a wheel chair some time each day, and sometimes is wheeled about. (T.S.R. 42. 2 P.M. 75. S.S. 60.)

1902. May 25. Sabbath. The different Secret Orders united in a Memorial Service this P.M. in our Hall. Our pastor was invited to take part, so we had no preaching service in our Church. The speaker in the Hall was W. H. Barnes of San Francisco. The weather was sultry and warm and towards eve we had clouds, thunder and lightning for two or three hours, but no rain. The graves at the Cemetery were decorated. Received letters from Hannah and Eunice. Hannah now takes a few steps at a time. (T.S.R. 58. 2 P.M. 87. S.S. 77.)

May 28. Wednesday. Susie Pascoe graduates today from Eureka High School. The graduating class members twentythree. Received a letter from Hannah and wrote to her and to Ada. (T.S.R. 48. 2 P.M. 77. S.S. 60.)

May 30. Friday. My birthday - also Calvin's - and I am today sixtysix and he is thirtythree - 66 and 33 - so that I am exactly twice his age, which can never be again. I have received as birthday tokens, a nickel-plated dish cover to keep my food hot from Theresa, a chemise from Eunice, a lovely musk-bowl from Alice and cloth for a shirt waist from Lou, and congratulatory letters from Hannah and the Cooke family, containing a short poem from Robert. Have written to Mother and Hannah. Am very thankful to be as well today as I am, for although I am obliged to use asthma smoke once in two hours day and night, still I am quite comfortable, and each day finds me able to read, write and sew a little, and with good appetite enjoying the good things of life. The schools closed today. Mary Inglis gave her pupils a treat of ice cream and cake after a program rendered by them, and they gave her a gold badge of the Order of Rebekahs, as it is understood she will teach here no more. Lulu Jack had a Social for her pupils in the Good Templar's Hall, with ice cream, cake and lemonade. Theresa helped them with the music. Wallace Locke called this P.M. He is moving all his household stuff to Diamond, Alamada Co. where he was rented a house to live in. (T.S.R. 48. 2 P.M. 78. S.S. 60.)