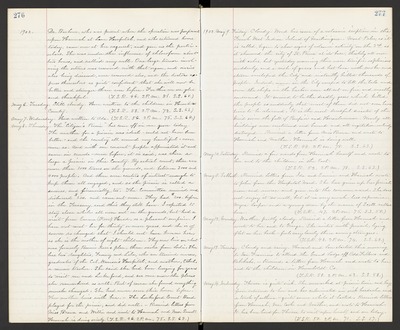 1902. Dr. Barbour, who was present when the operation was perform upon Hannah at Lane Hospital, and who returned home today, came over at her request, and gave us the particulars. She was under the influence of chloroform about two hours, and rallied very well. One large tumor involving the uterus was removed with that organ, and ovaries also being diseased, were removed also, and the doctors express themselves as quite confident that she will now be better and stronger than ever before. For this we are glad and thankful. (T.S.R. 46. 2 P.M. 81. S.S. 68.)

May 8. Thursday. The "Citizen's Picnic" has come off in our grove today. The weather for a picnic was ideal - could not have been better - and the country all around very beautiful - never more so. And with one consent people appreciated it and came in crowds - never before, it is said, was there so large a picnic in this County. By actual count, there were more than 1000 teams on the grounds, and between 3000 and 4000 people. And there were centers of interest enough to keep them all engaged, and so the picnic is called a success, and financially, too. The Committee received and disbursed $500. and came out even. They had $200. before in the Treasury and this they still have. I expected to stay alone while all were out on the grounds, but had a visit from Emma (Kerr) Hued, as a pleasant surprise. I have not met her for thirty or more years, and she is of course so changed that I should not have known her, as she is the mother of eight children. They now live on what was formerly Bennie Kerr's place, three miles from Lodi. She has two daughters, Fanny and Lila, who are trained nurses, graduates of the Cal. Woman's Hospital, and another, Ethel, a music teacher. She said she had been longing for years to visit me and Lockeford, and see one more the places she remembered so well. But of course she found everything much changed. She had never seen this house before. Her mother lives with her. The Lockeford Cornet Band played for the picnic, and did well. Received letters from Miss Brown and Willie and wrote to Hannah and Mrs. Smart. Hannah is doing nicely. (T.S.R. 46. 2 P.M. 75. S.S. 63.)

1902. May 9. Friday. Cloudy. Word has come of a volcanic eruption in the French West Indian Island of Martinique. Mont Pelee, as it is called, began to show signs of volcanic activity on the 3rd as it showered the city of St. Pierre at its base, thickly all over with ashes, but yesterday morning there were terrific explosions suddenly, and a rush of gases and hot lava with smoke and steam enveloped the City and instantly killed thousands of people. Indeed, none in the City escaped to tell the tale and even the ships in the harbor were all set on fire and mostly consumed. It seemed to be the deadly gases which killed the people so suddenly that most of them did not even have time to be alarmed. It is the most dreadful disaster of the kind since the fall of Pompeii and Herculaneum. Nearly all buildings were overturned and burned and all vegetation entirely destroyed. Received a letter from Miss Brown and wrote to Hannah and Mother. Hannah is doing well. (T.S.R. 48. 2 P.M. 78. S.S. 63.)

May 11. Sabbath. Received letters from Ida and Eunice and Hannah wrote to John from the Hospital Ward. She has given up her private room and nurse and gone into the common ward. She does not enjoy it so well, but is very much less expensive. Myra Looper and a young man by the name of Scott called here. (T.S.R. 47. 2 P.M. 75. S.S. 58.)

May 13. Tuesday. Cloudy and rainy. Howard and Lou started this morning to San Francisco to attend the Grand Lodge of Odd Fellows and Rebekahs. Received a letter from Hannah and wrote to her and to the children in Humboldt Co. (T.S.R. 58. 2 P.M. 63. S.S. 58.)

May 14. Wednesday. Theresa is quite sick. She overworked at picnic time and hay fever returned to her and has culminated in sick headache and a touch of asthma - quite severe while it lasted. Received letters from Hannah, Mr. Cooke and Mother, and wrote to Hannah. It has been hard for Theresa to wait upon herself and one today. (T.S.R. 50. 2 P.M. 71. S.S. 57.)