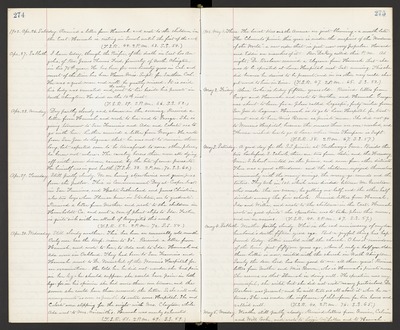 Apr. 27. Sabbath. I learn today, through the Pacific, of the death in East Los Angeles of Rev. James Thomas Ford, formerly of North Abington, in his 75th year. He has been for over twenty years in Cal. and most of the time has been Horne Miss. Supt. for Southern Cal. He was a good man and will be greatly missed. It is said his body was cremated and the ashes sent to lie beside his parents in North Abington. He died in the 14th inst. (T.S.R. 39. 2 P.M. 66. S.S. 52.)

Apr. 28. Monday. Day partly cloudy and shower in the evening. Received a letter from Hannah, and wrote to her and to George. She is going tomorrow to San Francisco and Ada and Celeste are to go with her. Luther received a letter from George. He wrote from San Jose de Laguna that he was not to remain there. long, but expected soon to be transferred to some other place, he knew not where. The cavalry horses there were all dying off with some disease, caused by the bite of some parasite. He himself was in good health. (T.S.R. 38. 2 P.M. 70. S.S. 60.)

Apr. 29. Tuesday. Still partly cloudy. We are having strawberries and green peas from the pedlar. This is Commencement Day at Cooper Inst. in San Francisco, and Hester Sutherland and James Christian, also two boys whom Theresa knew in Stockton, are to graduate. Received a letter from Mother and wrote to the children in Humboldt Co. and sent a can of plant slips to Ida. Father is quite sick with an attack of laryngitis this week. (T.S.R. 52. 2 P.M. 72. S.S. 54.)

Apr. 30. Wednesday. Still cloudy weather. This has been an unusually cold month. Only once has the temp. risen to 80-. Received a letter from Hannah, and wrote to her, to Ada and to Ida. Hannah and Ada were in Oakland. They had been to San Francisco and Hannah went to Dr. Vowinchkel of the Woman's Hospital for an examination. He told her he did not wonder she had pain in her leg - he should suppose she would have pain in both legs - for in his opinion she had more than one tumor, and the sooner she could have them removed the better. So she will make arrangements as soon as possible to enter some Hospital. She and Celeste were stopping for the night with Mrs. Clayton, while Ada went to Mrs. Naismith's. Hannah was nearly exhausted. (T.S.R. 51. 2 P.M. 69. S.S. 59.)

1902. May 1. Thurs. The locust tree on the Avenue are just blooming - a month late. The Clements picnic this year is under the auspices of the "Woodmen of the World" a new order that is just now very popular. Howard and Eddie are members of it. Rev. DeKay called this P.M. at night, Dr. Barbour received a telegram from Hannah that she was to be operated at Lane Hospital next Sat. morning. This she did because he desires to be present, and in no other way could she get word to him in time. (T.S.R. 47. 2 P.M. 65. S.S. 52.)

May 2. Friday. Alma Cooke is today fifteen years old. Received letters from George and Hannah and wrote to Mother and Hannah. George was about to leave for a place called Legaspi, forty miles from San Jose de Laguna. Hannah is to go to Lane Hospital for treatment and to have Miss Brown as private nurse. She did not go to Woman's Hospital, because the nurses there are over-worked, and Theresa wished her to go to Lane where Miss Thompson is Supt. (T.S.R. 38. 2 P.M. 67. S.S. 57.)

May 3. Saturday. A good day for the S.S. picnic at Tretheway's Grove. Besides the two Lockeford S. Schools, there are two from Lode and the Harmony Grove S. School united in the picnic, and some from other districts. There was good attendance and the children enjoyed themselves immensely with the many swings, the merry-go-rounds and the teeters. They took in $101, which were divided between Mr. Garretson who made the ice cream, he getting one-half, and the other half divided among the five schools. Received letters from Hannah, Ida and Willie, and wrote to the children in the East. Hannah wrote in good spirits - the operation was to take place this morn, and we are anxious. (T.S.R. 40. 2 P.M. 67. S.S. 57.)

May 4. Sabbath. Weather partly cloudy. This is the sad anniversary of my dear husband's death, fifteen years ago. But a joyful thing has happened today. Lottie united with the church. O how it reminds me of the time, just fifty one years ago, when I, only a half year older than Lottie is now, united with the church in North Abington. Surely the dear Lord has been good to me all these years! Received letters from Mother and Miss Brown, who is Hannah's private nurse. She assures us that Hannah is doing well. The operation was very successful, she writes, but she did not write many particulars, Dr. Barbour was present, and he will tell us all about it when he returns. She was under the influence of chloroform for two hours and rallied well. (T.S.R. 40. 2 P.M. 76. S.S. 65.)

May 5. Monday. Weather still partly cloudy. Received letters from Eunice, Calvin and Will Cooke, and wrote to Lizzie McLellan and to Hannah.