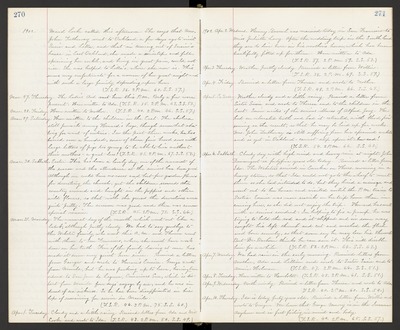 1902. Maud Locke called this afternoon. She says that Mrs. John Tretheway went to Oakland a few days ago to visit Susie and Lilla, and that in coming out of Susie's house in East Oakland, she made a misstep and fell, spraining her ankle, and being in great pain, could not rise. She was helped to Lilla's, where she now is. This seems very unfortunate for a woman of her great weight and with such a large family depending upon her. (T.S.R. 36. 2 P.M. 60. S.S. 57.)

Mar. 29. Saturday. Have written to the children in the East. The cholera still prevails among Howard's hogs, though somewhat abating for want of victims. In the past three weeks, he has buried over a hundred, some of them fine brood sows with large litters of pigs too young to be able to live without their mothers - a great loss! (T.S.R. 41. 2 P.M. 67. S.S. 58.)

Mar. 30. Sabbath. Easter. This has been a lovely day, one of the warmest of the season and the attendance at the services has been good. Although we could have no roses and but few garden flowers for decorating the church, yet the children scoured the country around and brought in the poppies and other wild flowers, so that with the greens the decorations were quite pretty. The sermon was good and there was some special music. (T.S.R. 45. 2 P.M. 73. S.S. 66.)

Mar. 31. Monday. The warmest day of the mouth, which went out "like a lamb," although partly cloudy. We had to say goodbye to the Webster family who went this A.M. and Theresa went with them to San Francisco, where she must have work done on her teeth. Five of the family leaving at once has made it seem very quiet here since. Received a letter from George and wrote to Horace's Eunice. George wrote from Manila, but he was packing up to leave, having been ordered to San Jose de Laguna, Camarines Sur, which is distant from Manila four days' voyage by sea, and he was in dread of sea-sickness. So he has been disappointed in his hope of remaining for service in Manila. (T.S.R. 46. 2 P.M. 75. S.S. 60.)

Apr. 5. Saturday. Weather cloudy and a little rainy. Received a letter from Sister Susie and wrote to Theresa and to the children in the East. Susie writes of the serious illness of Alfred Jory. He had an ulcerated tooth and had it extracted, with blood poisoning as the result, so that he may be laid up for weeks. Mrs. John Tretheway is still suffering from her sprained ankle and is yet in Oakland - cannot step upon it - how sad! (T.S.R. 54. 2 P.M. 66. S.S. 63.)

Apr. 6. Sabbath. Cloudy day with high wind and heavy rain at night. John Demangeot is fortyfive years old today. Received a letter from Ida. The Websters arrived in Eureka on Thurs. morning in a heavy storm, so that Ida could not gots the wharf to meet them as she had intended to do, but they hired a carriage and went out to her house and visited until the P.M. train to Scotia. Eunice was more seasick on her trip home than in coming here, so she did not enjoy the trip. Howard has met with a serious accident. In helping to fix a pump he was trying to hold the rod and it slipped and in some way caught his left thumb and cut and mashed the flesh and bone severely, so that some say he may lose his thumb. But Dr. Barbour thinks he can save it. This will disable him for a while. (T.S.R. 52. 2 P.M. 64. S.S. 63.)