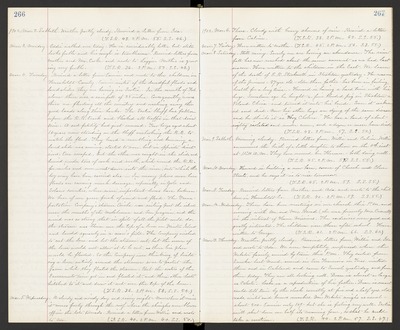 Mar. 3. Monday. Eddie walked over today. He is considerably better but still looks feeble and his cough is troublesome. Received letters from Mother and Mr. Cooke and wrote to Lizzie. Mother is growing very feeble. (T.S.R. 36. 2 P.M. 53. S.S. 48.)

Mar. 4. Tuesday. Received a letter from Eunice and wrote to the children in Humboldt County. Eunice writes of the dreadful floods and landslides they are having in Scotia. In the month of Feb. alone there was a rainfall of 25 inches. Consequently rivers there are flooding all the country and washing away the good lands along their banks. The Scotia bluff has fallen upon the R.R. track and blocked all traffic in that direction. A sad fatality had just occurred. Two boys aged about 16 years were standing on the bluff overlooking the R.R. to watch the flood. They heard a rumbling and knowing a land slide was coming, started to run, but in opposite directions. One escaped, but the other was caught in the slide and buried under tons of rock and earth, which covered the R.R. for miles and even went down into the river, into which the boy may have been carried also. In many places near here floods are causing much damage, especially in Yolo and Solano counties, where some important levees have broken. We hear of one queer freak of wind and flood. The Transportation Company's steamer Orisba was sailing past the island near the mouths of the Mokelumne and San Joaquin, and the wind was so strong that in spite of all the pilot could do, the steamer was blown over the top of a levee on Winter Island and landed squarely in a man's field. The Company wished to cut the levee and let the steamer out, but the owner of the levee would not allow it to be cut, as there his place would be flooded. So the Company were thinking of building a levee entirely around the steamer so as to protect the farm while they floated the steamer. But the waters of the Sacramento river got in and floated it, and three other boats hitched to it and drew it out over the top to the levee. (T.S.R. 36. 2 P.M. 58. S.S. 54.)

Mar. 5. Wednesday. A cloudy and windy day and rainy night. Now when it rains it comes freely through the roof where the shingles were blown off in the late tornado. Received a letter from Willie and wrote to Ada. (T.S.R. 40. 2 P.M. 60. S.S. 50.)

Mar. 8. Saturday. Still rainy. Surely we are having an abundance. The rainfall has now reached about the same amount as we had last season. Have written to the children in the East. We learn of the death of E.R. Stockwell in Stockton yesterday. He was one of the pioneers - 87 yrs. old - older than father - has been in failing health for a long time. Howard is having a hard time with his hogs. Sometime ago he bought a fine blooded pig in Stockton - a Poland China - and turned it into his band. Soon it sickened and died. Now his other hogs are dying of the same disease and he thinks it is "Hog Cholera." He has a band of about eighty isolated and under cover, and a dozen or more have died. (T.S.R. 43. 2 P.M. 57. S.S. 50.)

Mar. 12. Wednesday. There have been meetings in our church this P.M. and evening with Mr. and Mrs. Broad (she was formerly Mrs. Caswell) in the interest of Home Missions. The audiences were good and greatly interested. The children were there after school. Have written to George. (T.S.R. 41. 2 P.M. 66. S.S. 60.)

Mar. 13. Thursday. Weather partly cloudy. Received letters from Willie and Ida and wrote to Ada. We were completely surprised when the Webster family arrived by train this P.M. They sailed from Eureka last Mond, arrived in San Francisco on Tues. visited there and in Oakland and came to Sunol yesterday and from there today. They are all looking well. Dean is almost as large as Celeste. Locke is a reproduction of his father. Dean is smart could tell time by the clock correctly at five and a half yrs. old - reads, writes and knows numbers. Mr. Webster weighs as usual - about 200 - Eunice only 109 - but she is feeling very well. Scotia mill shut down one half its running force, so that he could take a vacation. (T.S.R. 44. 2 P.M. 57. S.S. 47.)