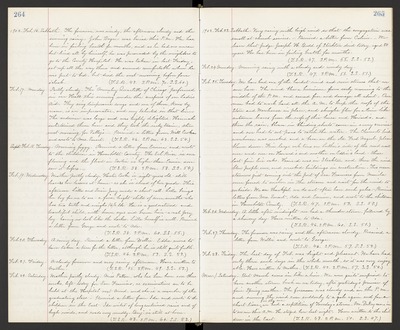 1902. Feb. 16. Sabbath. The forenoon was windy, the afternoon cloudy and the evening rainy. John Boyce was buried this P.M. He has been in failing health for months, and as he had no nurse but lived all by himself, he was persuaded by the neighbors to go to the County Hospital. He was taken in last Friday, sat up all the way there and seemed comfortable when he was put to bed, but died the next morning before four o'clock. (T.S.R. 43. 2 P.M. 70. S.S. 60.)

Feb. 17. Monday. Partly cloudy. The "Meneley Quartette of Chicago" performed in our Hall this evening under the auspices of our Ladies Aid. They sing temperance songs and one of them, Knox by name, is an impersonator, and very talented in that line. The audience was large and was highly delighted. Hannah entertained them here and they took the early train, the next morning, for Vallejo. Received a letter from Will Cooke and wrote to Mrs. Smart. (T.S.R. 46. 2 P.M. 62. S.S. 54.)

Feb. 18. Tuesday. Morning foggy. Received a letter from Eunice and wrote to the children in Humboldt County. The Eel River is over flowing and the flood in Scotia is higher than Eunice ever saw it before. (T.S.R. 38. 2 P.M. 58. S.S. 54.)

Feb. 19. Wednesday. Weather partly cloudy. Hester Cooke is eight years old - still learns her lessons at home - as she is ahead of her grade. This afternoon Lilla and Susie Jory made a short call. Lilla brings her bog for us to see - a fine, bright child of seven months - who has two teeth and weighs 16 1/2 lbs. He is a good natured and beautiful child, with brown eyes and brown hair - a real Jory boy - having no look like the Lockes. Lilla herself is well. Received a letter from George and wrote to Ada. (T.S.R. 38. 2 P.M. 60. S.S. 55.)

Feb. 22. Saturday. Weather partly cloudy. Miss Patton, who has been here over three weeks, left today for San Francisco, as examinations are to be held at the Hospital next Mond. and she is a member of the graduating class. Received a letter from Ida and wrote to the children in the East. Ida writes of long continued rains and of high winds, and roads very muddy. Benj - is still at home. (T.S.R. 43. 2 P.M. 60. S.S. 53.)

Feb. 25. Tuesday. We have had one of the hardest wind and rain storms that we ever have. The wind blew a hurricane from early morning to the middle of the P.M. and caused fear and damage all about. Our men had to work hard all the A.M. to keep the roofs of the Store and Warehouse in place, and shingles flew for a time like autumn leaves from the roofs of this house and Howard's, and then the rain, blown in blinding sheets came in every crevice and we had to set pans to catch the water. The Clements brick warehouse was wrecked and a barn on the old Fred Megerle place blown down. Five large oak trees on Luther's side of the road went over and one on Howard's and another on Eddie's land - these last - fine live oaks. Howard was in Stockton and there the wind blew people over, and wrecked buildings in construction. Two ocean steamers just coming into the port of San Francisco from Manila were forced to anchor in the stream and wait for the wind to subside. We are thankful we do not often have such gates. Received letters from Mrs. Smart, Ada and Eunice, and wrote to the children in Humboldt County. (T.S.R. 47. 2 P.M. 53. S.S. 53.)

Mar. 1. Saturday. But March came in like a lion. We were quite surprised to have another storm buck on us today, after yesterday's promise of fine Spring weather. The forenoon was cloudy and in the P.M. and evening the wind rose suddenly to a gale again and for a short time in the eve we had a repetition of Tuesday's storm. Mr. DeKay came in to see me this A.M. He staged here last night. Have written to the children in the East. (T.S.R. 43. 2 P.M. 50. S.S. 47.)