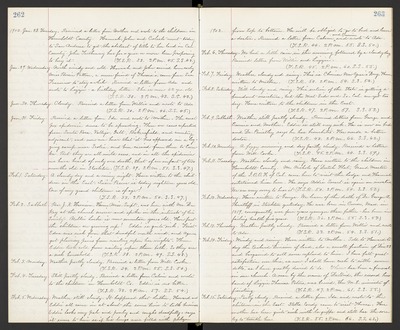 Jan. 31. Friday. Received a letter from Ida and wrote to Mother. The small pox epidemic seems to be spreading. There are cases reported from Santa Rosa. Vallejo, Galt, Bakersfield, and country adjacent, and now we hear that it has appeared in a logging camp near Scotia, and been carried from there to Eureka. But they are all mild cases, and in all the epidemic we have heard of only one death, that of an infant of two months old in Stockton. (T.S.R. 29. 2 P.M. 51. S.S. 47.)

Feb. 2. Sabbath. Rev. J. K. Harrison. Horne Miss. Supt., was here with Mr. DeKay at the church service and spoke in the interests of his Society - Nellie Locke is now seventeen years old. How fast the children are growing up! Eddie is quite sick. First Edna was sick from that dreadful north wind, and Agnes got pleurisy pains from waiting upon her nights. Then Eddie took cold from waiting upon them both. So they are a sick household. (T.S.R. 38. 2 P.M. 49. S.S. 48.)

Feb. 5. Wednesday. Weather still cloudy. It happened that Luther, Howard and Eddie all came in at about the same time to talk business. Eddie looks very pale and poorly and coughs dreadfully - says it seems to him as it his lungs were filled with phlegm

Feb. 9. Sabbath. Weather still partly cloudy. Received letters from George and Eunice and Mother. Eddie is still very sick. He is now in bed and Dr. Priestly says he has bronchitis. He needs a better doctor. (T.S.R. 48. 2 P.M. 66. S.S. 62.)

Feb. 11. Tuesday. Weather cloudy and rainy. Have written to the children in Humboldt County. Mr. Nichols of Dutch Flat, Grant Master of the I.O.O.F. of Cal. came here to visit the Lodge and Hannah entertained him here. He says Addie Smart is again an invalid We are very sorry to hear it. (T.S.R. 50. 2 P.M. 54. S.S. 53.)

Feb. 14. Friday. Windy and rainy. Have written to Mother. Sold to Howard today the Orchard Division of land, also a small fraction of Div. 23 and bargained to sell some upland to him. I have felt great satisfaction over this, as now I shall have cash to settle some debts, as I have greatly desired to do. There has been a funeral in one church. A man by the name of De Boid, the second husband of Lizzie Thomas Peters, was burried, the M.E. minister officiating. (T.S.R. 47. 2 P.M. 61. S.S. 55.)

Feb. 15. Saturday. Partly cloudy. Received a letter from Ida and wrote to the children in the East. Stella Condy came to visit Theresa. Her mother has been quite sick with la grippe and still has the sore leg to trouble her. (T.S.R. 55. 2 P.M. 66. S.S. 63.)