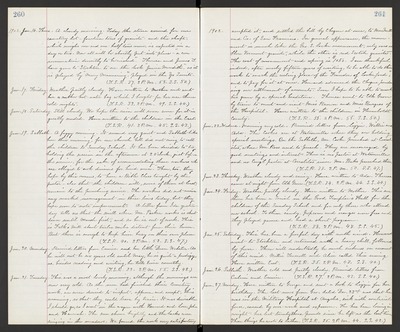 1902. Jan. 16. Thurs. A cloudy morning. Today the stone arrived for our cemetery lot - fourteen tons of granite - and the shaft, which weighs one and one-half tons more, is expected in a day or two. Now all will be shortly put into place - "a consummation devoutly to be wished". Theresa and James T. have gone to Stockton to see the book "Janice Meredith", as it is played by "Mary Mannering", played in the Yo Semite. (T.S.R. 37. 2 P.M. 55. S.S. 50.)

Jan. 19. Sabbath. A foggy morning. It seemed very quiet and Sabbath-like here this morning, for our church bell did not ring to call the children to Sunday School. It has been decided to try holding the session in the afternoon at 2 o'clock, just before the service, for the sake of accommodating those workers who are obliged to cook dinners for hired men. Thou, too, they hope by this means, to have a Bible Class tonight by the pastor - also that the children will, some of them at least, remain to the preaching service. The workers did not receive any marked encouragement in these lines today, but they hope soon to note improvement. A letter from Ida yesterday tells us that the mill where Mr. Parker works is shut down until March first, and so he is out of work. This is Falk's mill about twelve miles distant from their home. But there is enough to keep him busy on their own place. (T.S.R. 40. 2 P.M. 52. S.S. 47.)

Jan. 21. Tuesday. This was a most lovely morning, although the mornings are now very cold. As the men had finished their Cemetery work, we were desired to inspect, approve and accept, this morning, so that they could leave by train. It was desirable I should go, so I went in the wagon with Howard and Lou, John and Hannah. The sun shone brightly and the larks were singing in the meadows. We found the work very satisfactory

1902. accepted it, and settled the bill by Cheque at once, to Machutt and Co. of San Francisco. In general appearance, the monument is much like the Geo. S. Locke monument, only ours is blue Vermont granite, while the other is red Scotch granite. The cost of monument and coping is $1050. I am thankful indeed, after nearly fifteen years of waiting, to be able to do this work to mark the resting-place of the "Founder of Lockeford", and to pay for it at once. Howard advanced the Cheque [?] our settlement of accounts. Soon I hope to be able to mark his grave by a special headstone. Theresa event to Elk Grove by train to meet and visit Miss Brown and Miss Burgess of the Hospital. Have written to the children in Humboldt County. (T.S.R. 35. 2 P.M. 55. S.S. 50.)

Jan. 22. Wednes. Morning very cold. Received letters from, Lizzie. Willie and Ada. The Cookes are at Watsonville where they are holding special meetings. On the Sabbath, Mr. Cooke preached at Corralitos, where Mr. Ross used to preach. They are encouraged by good meetings and interest. There is no pastor at Watsonville and no Cong'l pastor at Corralitos since Mr. Perks preached them. (T.S.R. 33. 2 P.M. 50. S.S. 47.)

Jan. 24. Friday. Weather partly cloudy. Have written to Mother. This eve there has been a Social in the Good Templar's Hall for the children of the Sunday School and for only those who attend our school. To them candy, popcorn and oranges were free and they played games and had a short program. (T.S.R. 38. 2 P.M. 48. S.S. 45.)

Jan. 25. Saturday. This has been a fearful day with north wind. Howard went to Stockton and returned with a heavy chill, followed by fever. There will undoubtedly be much sickness on account of this wind. Nettie Truscott and Alice called this evening. Have written East. (T.S.R. 35. 2 P.M. 43. S.S. 40.)

Jan. 27. Monday. Have written to George and sent a book to Lizzie for her birthday. The last news from Geo. dated Dec. 23rd was that he was in the Military Hospital at Angeles, sick with malarial fever, caused by over-work and exposure. He has been losing in weight - has lost twentythree pounds since he left us the last time. These things he wrote to Luther. (T.S.R. 25. 2 P.M. 44. S.S. 42.)