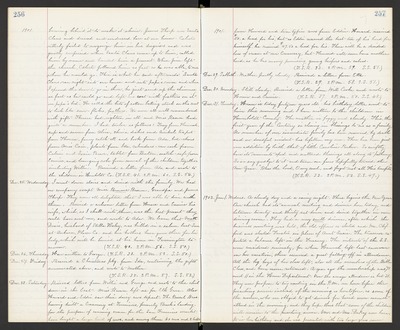 1901. burning behind it to make it shine. James Thorp was Santa Claus and dressed and undressed here at our house. Celeste utterly failed to recognize him in his disguises and was greatly surprised when Santa Claus came up to him, called him by name and handed him a present. When Jim left the church, Celeste followed him as fast as he was able, to see where he would go. This is what he said afterwards. "Santa Claus saw right into our house and into papa's room and when I opened the door to go in there, he just send up the chimney as fast as he could go and left his coat with feathers on it on papa's bed." He called the bits of cotton batting stuck on the coat to look like snow-flakes, feathers. We were all well remembered with gifts. Theresa had eighteen in all and Miss Brown had quite a number. I had twelve as follows: Tray from Hannah, cup and saucer from Alice, china dishes and Nickel teapot from Theresa, fancy catch all and book from Ada, bed shoes from Miss Cain, plants from Ida, calendars - one each from Calvin and Susie Pascoe, tablet from Benton, match-safe from Eunice, and lounging robe from several of the children together including Willie. Received a letter from Ada and wrote to the children in Humboldt Co. (T.S.R. 41. 2 P.M. 60. S.S. 56.)

Dec. 25. Wednesday. I went down stairs and dined with the family. We had no company except Miss Brownie Brown, Grandpa and James Thorp. They were all delighted that I was able to dine with them. Received a welcome letter from Horace and Eunice his wife, which, as I shall write them, was the best present they could have sent one, and wrote to Ada. We learn that Matt. Drais, husband of Stella Haley, was killed in a saloon last Sun. at Auburn, Placer Co. and his brothers have gone there for his body, which will be buried at his home in Farmington tomorrow. (T.S.R. 40. 2 P.M. 56. S.S. 50.)

Dec. 28. Saturday. Received letters from Willie and George and wrote to the children in the East. Miss Brown left us for Elk Grove. Also Howard and Eddie saw there daisy cows depart. The Russel Bros. having built a Creamery at [?], formerly Brack's Landing, for the purpose of canning cream for the San Francisco market, have bought a large herd of cows, and among them 60 cows and 2 bulls

1901. from Howard and twentyfive cows from Eddie. Howard received $50. a head for his, but as Eddie reserved the best ten of his herd for himself, he received $47.50 a head for his. There will be a decided loss of cream at our Creamery, but Howard will soon have another herd, as he has many promising young heifers and calves. (T.S.R. 32. 2 P.M. 59. S.S. 51.)

Dec. 31. Tuesday. Horace is today fortyone years old - his birthday letter went to him this morning and I have written to the children in Humboldt County. The weather is foggy and cloudy. This, the first year of the Century is closing in blessings to us as a family. No member of our immediate family has been removed by death and no dreadful accident has befallen any one. There has been just one addition by birth, that of little Caroline Parker. So swiftly have its moments sped and scattered blessings all along its pathway. So we say goodbye to it and turn our faces hopefully toward the New Year. "Bless the Lord, O my soul, and forget not all His benefits". (T.S.R. 33. 2 P.M. 52. S.S. 49.)

1902. Jan 1. Wednes. A cloudy day and a rainy night. Thus begins the New Year. Our church had its annual meeting and dinner here today, and between twenty and thirty sat down and dined together in our dining room. They had a very swell dinner, after which the business meeting was held, the old officers re-elected and Mr. Clifford was elected Trustee in place of Aunt Susie. The treasurer reported a balance left in the Treasury. The interests of the S.S. were considered seriously, for when Hannah left last summer on her vacation, there occurred a great falling-off in attendance. All the big boys of her class left, also all the members of the Bible Class, and have never returned. A year ago the membership was 71 and 11 in the Home Department. Now the average attendance is but 31. They now propose to try meeting in the P.M. an hour before the preaching service instead of the morning as heretofore, as some of the women, who are obliged to get dinners for hired men cannot attend in the morning, and they hope thus that some of the children will remain to the preaching service. Mr. and Mrs. DeKay were here. It is her birthday and she was presented with two large glass sauce