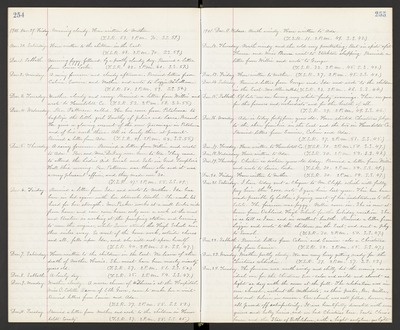 Dec. 4. Wednesday. Rev. Patterson called. He has come from Petaluma to baptize the little girl Dorothy of Julius and Laura Bruml. He gives a glowing account of the new parsonage in Petaluma and of his work there. All is lovely there at present. Received a letter from Ada. (T.S.R. 49. 2 P.M. 62. S.S. 55.)

Dec. 5. Thursday. A rainy forenoon. Received a letter from Willie and wrote to Ada. Rev. and Mrs. DeKay were here to tea. They came to attend the Ladies and Social and Sale in Good Templar's Hall this evening. Rev. Patterson was there also and it was a very pleasant affair, and they made over $30. (T.S.R. 47. 2 P.M. 55. S.S. 49.)

Dec. 6. Friday. Received a letter from Ida and wrote to mother. Ida has been in bed again with her stomach trouble. She work too hard for her strength. Mr. Parker works at a mill twelve miles from home and can come home only once a week at the most and Benton is working at the pumping station and learning to run the engine, while Susie attends the High School some there miles away. So most of the home work, outside chores and all, falls upon Ida, and she will not spare herself. (T.S.R. 44. 2 P.M. 54. S.S. 47.)

Dec. 21. Saturday. I have today sent a Cheque to Mr. Clapp which will fully pay him the $2000. note I gave him last year. This has been made possible by Luther's paying most of his indebtedness to the Estate. The forenoon was foggy. Nellie came in. She is now at home from Oakland High School for the holiday vacation. She is as tall as I am and in excellent health. Received a letter from Lizzie and wrote to the children in the East, and sent a pkg. to Sunol. (T.S.R. 30. 2 P.M. 50. S.S. 47.)

Dec. 24. Tuesday. The forenoon was north windy and chilly but the evening was an ideal one for the Christmas tree - calm and mild and almost as light as day with the moon at the full. The celebration was in our church, without the methodists, as their pastor, Rev. Miller, does not believe in union. Our church was well filled, however, and all passed off satisfactorily. It was beautifully decorated with ever greens and holly berries, and we had Christmas tree. Santa Claus's house and the Star of Bethlehem, with a bright acetylene gas light