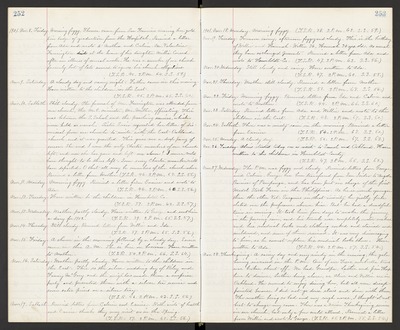 1901. Nov. 8. Friday. Morning foggy. Theresa came from San Francisco wearing her gold pin badge of graduation from the Hospital. Received a letter from Ada and wrote to Mother and Calvin. Mr. Valentine Farrington died at the home of his daughter Millie Coward after an illness of several weeks. He was a member of our church formerly, but of late seemed to ignore his church obligations. (T.S.R. 40. 2 P.M. 64. S.S. 59.)

Nov. 10. Sabbath. Still cloudy. The funeral of Mr. Farrington was attended from our church, the M.E. Minister, Mr. Miller, officiating. This was between the S. School and the preaching services, which were held as usual. Sister Susie requested her letter of dismissal from church to unite with the East Oakland church, and it was granted. This gives me a deep pang of sorrow. She and I were the only Chester members of our church left, and now she has gone and left me alone! I never could have thought to be thus left. Soon every Charter member will have departed. O that all may be members of the church above Received a letter from Mother. (T.S.R. 46. 2 P.M. 63. S.S. 55.)

Nov. 16. Saturday. Weather partly cloudy. Have written to the children in the East. This is the silver wedding day of Riley and Fanny McGary and the neighbors made them a surprise party and presented them with a silver tea service and some extra pieces on a silver tray. (T.S.R. 46. 2 P.M. 63. S.S. 56.)

Nov. 27. Wednesday. The P.M. was foggy and cloudy. Received letters from George and Calvin. George has been transferred from San Isidro to Angeles Province of Pampanga, and has been put in charge of the first Model Stock Farm in the Philippines. As he is much younger than the other Vet. Surgeons in that vicinity, he justly feels elated over the preference shown him. But he had a dreadful time in moving. It took him four days to make the journey in the pouring rain, and his trunk was completely water-soaked and his medical books and clothing soaked and stained and mildewed, and some of them ruined. It was very discouraging to him, as he cannot replace his medical books there. Have written to Ada. (T.S.R. 44. 2 P.M. 57. S.S. 54.)

Nov. 28. Thanksgiving. A rainy day and very windy in the evening, the gale having increased in the P.M. One of our Texas umbrella trees was broken short off. We had Grandpa, Luther and Jim Thorp here to dinner, Luther being alone, as Alice and Nellie are in Oakland. He seemed to enjoy dining here, but all were disappointed because I did not go down stairs and dine with them. The weather being so bad and my cough worse, I thought it not best to change my room. There was a Union Thanksgiving service in our church, but only a few could attend. Received a letter from Willie and wrote to George. (T.S.R. 45. 2 P.M. 55. S.S. 54.)